Most unforgettable Gilas Pilipinas moments of 2014 Facebook Twitter Copy URL
Copied
These are moments you will never get tired of reliving. These Gilas Pilipinas moments of 2014 are ones you'll never forget

MANILA, Philippines – Where were you when Jimmy Alapag established his own personal three-point line as he drained long triple after long triple in the FIBA Basketball World Cup last September?

Where were you when Paul Lee laid out his heart of steel for all to see and sank three cold-blooded bronze medal-clinching free throws in the FIBA Asia Cup last July, without so much as flinching?

Where were you when Gabe Norwood put a 6-foot-9 NBA veteran on a poster with a massive throwdown that emphatically announced the Philippines’ entry into the world basketball stage?

You may have been at Seville, Spain, witnessing every heart-stopping second of history unfold before your eyes. You may have been in a foreign land, crowding around a TV or Twitter with fellow Filipinos for every update.

You may have been in one tiny corner of the Philippines, yelling, cheering, jeering, crying at a screen for every error and every point scored. Wherever you may have been, one thing is certain: These moments are ones you immediately knew you’d tell your grandchildren someday.

These are moments you’ll never get tired of reliving. These are moments that inspired you, moved you, or carried you throughout a day. These Gilas Pilipinas moments are ones you would never forget.

5. The near-wins that resembled hope They say Filipinos have a tendency to celebrate mediocrity. But in this instance, falling short mattered.

In the Philippines’ first appearance on the world stage of basketball since 1978, expectations were less than modest. Grouped with world basketball powers like Argentina, Croatia, Greece, and Puerto Rico, Gilas Pilipinas came in braced for unforgiving double-figure beatings. But to the world’s surprise, the undersized Gilas stood just as tall as their foes.

Gilas exploded on the scene in just their first game against Croatia, shrugging off expected jitters and overturning a 15-point lead to make it a ballgame, eventually forcing overtime. The Croats, though clearly caught off guard, survived the Filipinos’ rally, 81-78. Right then and there, people began to notice.

Later on, the Philippines was on the brink of pulling off a monumental upset versus the world’s third-ranked Argentina, leading by as much as 10 early and hanging on for just a slim 85-81 loss. By then, Gilas had everyone’s attention.

(READ: Chot Reyes on Argentina loss: ‘This one really hurt’)

Another near-win, this time against Puerto Rico, officially put Gilas out of contention for the Round of 16. It was their fourth straight heartbreaking loss, 77-73.

You could look at how nearly winning is not enough. You could focus on the what-ifs. But you can’t deny the fact that Gilas shot down so many misconceptions and well-analyzed predictions coming into this tournament. This is their first World Cup appearance in 4 decades, yet they took the fight to the powerhouses of the world. Even the downfall at the Asian Games – when a battle-weary Gilas underperformed in Seoul shortly after arriving back from Spain – does not diminish what Gilas achieved in the World Cup.

And that, more than anything, sets up Philippine basketball for the future. You don’t have to gain it all at once. You just have to take a few steps forward. Just a couple of weeks earlier, Paul Lee, as he is known locally, attempted to fish for a foul taking a triple in the PBA Governors’ Cup Finals. The whistle did not go off then, but it rang loud on a Chinese court in a battle for third with the hosts of the 2014 FIBA Asia Cup.

China was probably wondering what a 6-foot-1 bald guy called Paul Dalistan (in international competitions at least) could do to the regional favorite. Lee trooped to the line with the air of confidence he always had as his teammates looked on, trusting.

Certainly, with Gilas down by two and with no time left on the clock, this guy from a place called Tondo could never make all 3 free throws and steal the bronze medal from China. But he could, and he did.

It took 4 attempts, one heartbreak after another, miles and miles of travel, months spent away from family, years of preparation and experimentation, years of sacrifice and almost getting there, generation after generation. It took 4 decades for the Philippines to win again on the world stage, and it was worth the wait. (READ: Why one win matters)

2. The throwdown of a lifetime

Anybody who has seen Gabe Norwood in the local pro league knows how high he can rise. And when a streaking Jayson Castro passed the ball ahead to Norwood leading the fastbreak, most were 80% sure he would slam it home. But nobody expected he would posterize the Indiana Pacers’ Luis Scola in the process.

Norwood’s jam over Scola was the loudest, most explosive way to re-introduce Philippine basketball to the rest of the planet. It was like Norwood threw it down with the force of every Filipino’s strength.

1. Jimmy Alapag and his mightiest heart

And the most unforgettable Gilas Pilipinas moment of this year? When Jimmy Alapag hit the climax of his international playing career.

Whether you were a fan from the very beginning or you just learned of Alapag this year, it was impossible not be moved by how he carried Gilas Pilipinas on his 5-foot-9 frame – not only this year, but every year in the past decade. (WATCH: Jimmy Alapag talks Gilas Pilipinas)

Chot Reyes deployed Alapag whenever Gilas needed to restore order or a burst of life, and the 36-year old veteran delivered like he always does. He willed Gilas to a potential upset of Argentina, playing his heart out for 15 points on 5-of-7 three-pointers – one of which brought Gilas to within 82-81 with less than two minutes left. And though they fell short in those games, he went on to drop his tournament high 18 points in the ensuing win versus Senegal.

Alapag represented everything an everyday Filipino was – a hardworker, dedicated, small but terrible. He was the little guy who could. With every shot and pass, he carried with him the hope of his countrymen, basketball fan or not, and showed the world that Filipinos are not pushovers. 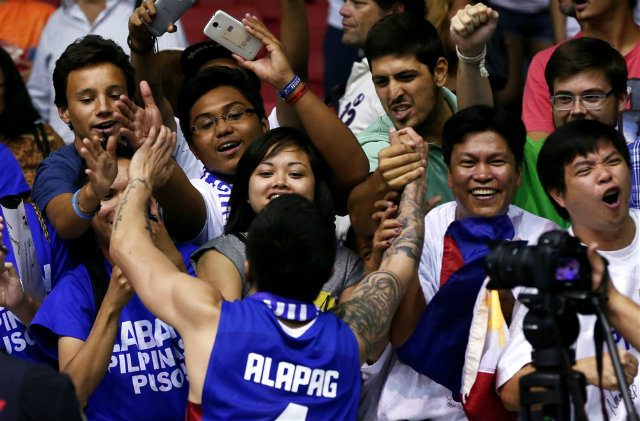 He was living proof of the redemptive qualities of hard work and desire, that even the smallest guys can win.

Alapag was at his peak in 2014, and it will also be the last time we will ever see him in a Pilipinas jersey. He has retired from international play, but his footprints are all over the national basketball program. And that, too, will never be forgotten.

“We belong here,” said Alapag, the team captain, the leader, the Mighty Mouse. “We just gotta make sure we stay here.”

What are your most unforgettable Gilas Pilipinas moments from this year? Share them in the comments section below! There are no right or wrong answers.