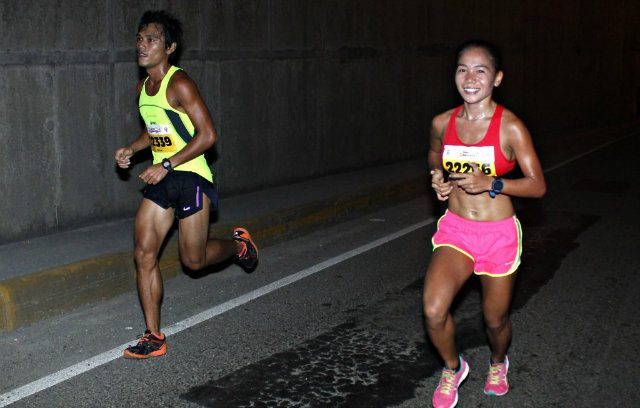 CEBU CITY, Philippines – Many were surprised to see a “little girl” on the podium of the Standard Chartered Hong Kong Marathon, which was contested over the weekend.

At just 4-foot-11, Tabal’s head barely reached the shoulders of the Australian runners who finished first and third.

Despite her diminutive stature, Tabal, who hails from the mountainous Cebu City barangay of Guba, already has a string of podium finishes in various running events not only in her home country of the Philippines, but also in international races.

The Hong Kong race was her first international race of 2015, one that she didn’t fully expect to place in the top 3 of. She had been using the race to prepare for a bigger event this March, the LA Marathon. It was a surprise for her, but a pleasant one.

“I was challenged because we needed to go to the starting line very early just to make sure I can have a good position,” said Tabal.

“I did not belong to the group of elite runners. I was mixed among the thousands of runners, it was very crowded and I had less time to warm up properly. Unlike if you are among the elite, you have a better position and have a better and wider area to warm up. But that did not discouraged me. Instead, I got challenged.”

For this very reason, Tabal is counting the Hong Kong race among her memorable international races. According to her, she always has special memories of all the races she has joined abroad wherein she gets to intensely challenge herself.

She also gets to encounter different kinds of runners; she learns something in every race such as identifying what area she needs to improve on so she can compete with the international runners.

However for her, what she really holds special in her heart was the Paris Marathon last year, which she qualified for as the 2013 Milo Marathon national champion.

“Being there was really, really lucky,” Tabal said. “I didn’t imagine I would be racing in that marathon…and Paris Marathon belongs to the top 6 Marathon in the world. It’s in that race wherein stepping at the starting line with the top marathoners in the world was a dream come true. I am very, very happy that I got to experience running in Paris.

“And unexpectedly I finished 17th overall among a field of strong female runners.”

Unlike other athletes, Tabal stumbled into the sport of running by accident. When she was in sixth grade, she was made to join her school’s intramurals and won. She was then sent to the division meet, the City Olympics, the Central Visayas Regional Athletic Association meet and the Palarong Pambansa, wherein every student athlete dreams of competing.

“I had no idea, I just joined and I was winning even if it was my first time to run. I had a very memorable experience when I was in grade 6. It was just all in that one year.” After that memorable year, Tabal was offered a secondary varsity scholarship from various schools but she did not accept any of them because she wanted to focus on her academics. She had no involvement in sports during her high school years, which she finished with salutatorian honors.

Apparently, Tabal’s achievement in that so-long-ago year was not forgotten as she once again received scholarship offers for college. This time, Tabal did not pass on the opportunity and became a varsity scholar of the Southwestern University, where she recently graduated with the degree of Bachelor of Science in Commerce Major in Management Accounting.

It was also at this point in her life that she was influenced by her current coach, multi-titled runner John Philip Duenas, to try her hand at long distance running as he saw the potential in her. In her third year of college, she started joining 3-K and 5-K races.

Tabal fondly recalls collapsing at the finish line of her first 10-K race which she finished in 45 minutes to place fifth. She woke up in the hospital where she got confined for hypogyclemia. Because of this experience, she learned to become a stronger athlete in every race she has joined and resolved that it would never happen to her again.

If Paris Marathon was for Tabal her most memorable international race, she chooses the Milo Marathon as the local race closest to her heart.

“It is in Milo that I started dreaming of becoming one of the best runners in the country.”

Her first foray into the Milo Marathon was the 5-K in 2009, then she moved up to the 21-K the next year, finishing first and qualifying for the finals. In her first national 42-K race, she finished third, and had the same finish in 2011.

In 2012, she finished first in the Cebu leg but only managed 4th overall in the nationals. But in 2013, she finally clinched the national title which paved the way for her to compete in the Paris Marathon. In 2014, she defended her title and this time earned a slot for the LA Marathon happening this March.

In 2012, Coach Philip had Tabal taking her chances in international races. They both joined the Singapore Sundown Marathon and clinched the male and female titles of the 21-K race.

“We joined local and national races, then, we save our winnings and use it to pay for our entry in international races,” said Tabal.

Tabal has finished races in Malaysia, Japan and Korea as well.

Tabal and Coach Philip will also be already giving back to the community by helping the Cebu City Sports Commission in its grassroots marathon program.

They will introduce the sport of running to the kids in the mountain barangays specializing in long distance running and they will start in her own barangay in Guba.

“We want to help and share how we dreamed of becoming the best athletes of Cebu City,” said Tabal. “Hopefully we will be able to spot some talents and hone them. Perhaps in the future, we will be able to build strong athletes to represent the city and the country. It is our turn to give back and somehow inspire the kids to be like me.”

“We will help them (sports commission) explain the good side of running, its benefits that aside from fitness. It can help them find a good school for college and in turn we might be able to find the next Mary Joy Tabal,” said Duenas. Coach Philip added that they will encourage the kids to show whatever hidden talents they have in the sport and show them how running can change their lives and give them a better future. “This will also help keep them off drugs and other bad influences of the society.”

Already having several titles under her belt, is there anything else that she wants to achieve?

Tabal hopes she will be able to do so this year, at the peak of her running career.

Rightly so, the Cebuana runner has already qualified for the biennial event which will be held in Singapore this June after clocking two hours and 48 minutes in the 2014 Milo Marathon national finals.

Mary Joy might have the chance to reach her goal this year after receiving a call from Philip Juico, the president of the Philippine Amateur Track and Field Association. However, the lineup is still being finalized.

Cebu has found a gem in Tabal. She’s hoping to show the world and her country what she can do if given the chance to represent the nation. – Rappler.com

Marsante G. Alison is based in Cebu and has nearly a decade of experience as a sports writer and editor. She has covered national and international events and supports grassroots programs in a diverse field of sports.