Mar 14, 2015 9:22 AM PHT
Jodesz Gavilan
Facebook Twitter Copy URL
Copied
Official data show that all of the cities in Metro Manila are faring better than others in the war against malnutrition 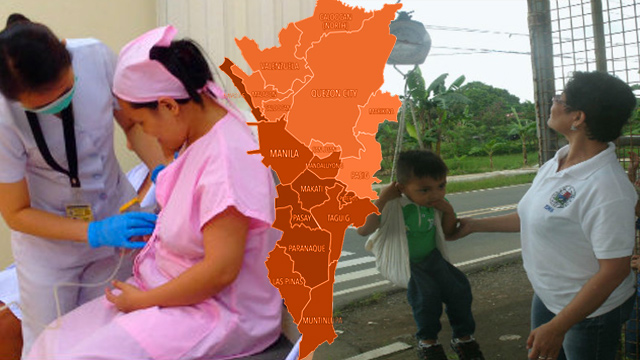 MANILA, Philippines – Urbanization may be hindering food security in the Philippines, but some cities in the National Capital Region have shown that they can overcome this hurdle.

According to data from the 2014 Operation Timbang (OTP) Plus, all of the cities in Metro Manila are doing fairly well in fighting malnutrition, compared to those in other regions.

Despite being the most populous region in the country with at least 11.5 million residents, NCR still ranks the lowest when it comes to the prevalence of undernourishment among children under 5 years old. (READ: Where to find highest number of undernourished children in NCR?)

The results of the 8th National Nutrition Survey (NNS) of the Food and Nutrition Research Institute (FNRI) show that almost 13% of children under 5 years old in NCR are underweight, below the national average of 19.9%.

In addition, the combined prevalence of underweight and severely underweight children under 6 years old has been decreasing over the years.

The downtrend is not possible without the efforts of local government units (LGUs) and their nutrition programs that target underprivileged sectors.

What are the top 5 NCR cities with the lowest number of malnourished children based on OTP Plus results collected by Barangay Nutrition Scholars (BNS)? 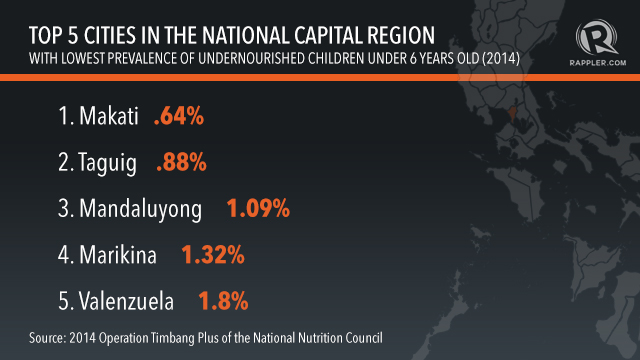 The data is based on the results of the annual weigh-in of pre-schoolers below 6 years old (or 0 to 71 months old) in different communities. The weigh-in is led by the National Nutrition Council-National Capital Region (NNC-NCR) and aims to identify and locate malnourished children for local nutritional planning. (READ: Who are your barangay nutrition scholars?)

Out of the 5 cities, 4 have been part of the list for 3 consecutive years: Taguig, Mandaluyong, Marikina, and Makati.

Makati remains unmoved from the top spot since 2013, while others alternate ranks.

It is important to note, however, that the biggest improvement in the past years can be seen in Taguig. The city climbed from 5thin 2012,  to 4th in 2013 and in 2014, is just behind Makati.

NNC-NCR awarded the 2014 Green Banner Award to Taguig City for its outstanding nutrition program implementation and management among its constituents.

Quezon City fell out of the top 5 after two years, replaced by Valenzuela which is in 5th place.

The OTP results, however, show that the nutritional status of children in NCR is faring well compared to other regions.

However, several factors may hinder more improvement in the region, such as the increasing number of families who do not consume the right type of food.

Based on the results of a Social Weather Stations (SWS) survey in 2014, Metro Manila’s hunger rate average was  16%. In addition, families who consider themselves as food-poor, or lack the proper type of food to meet their daily nutrients needs, rose to 41% –higher than 2013’s average of 39%. (READ: How hunger was the Philippines in 2014)

The NNC recommends strengthening the various programs of the LGUs that target not just those who are suffering but also those vulnerable to malnutrition such as children in impoverished areas. (READ: Who are the near-poor in the Philippines?)

Through this, any increase in the prevalence of malnourished children can be prevented.  – Rappler.com