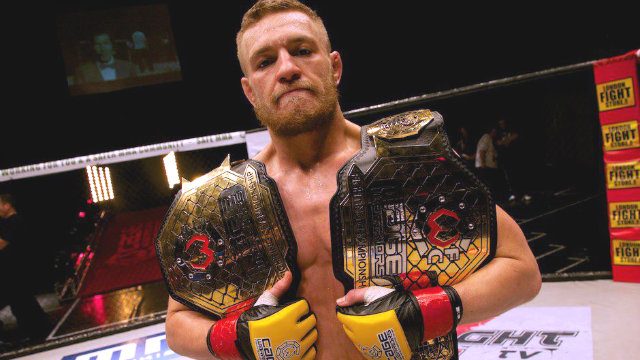 Facebook Twitter Copy URL
Copied
'I would love to head to Manila. I’m sure it’s pretty nice out there. We will see where it takes me'

MANILA, Philippines – With the Philippines gaining a lot of attention from the international mixed martial arts (MMA) scene lately, another Ultimate Fighting Championship (UFC) superstar expressed his interest to showcase his skills in the country.

Featherweight fighter Conor McGregor told Rappler that he is willing to make the trip to the fight capital of the Southeast Asian region if the opportunity presents itself.

“For sure, I would love to head to Manila. I’m sure it’s pretty nice out there. We will see where it takes me,” he said.

The 26-year-old Irishman is currently booked to challenge Jose Aldo for the featherweight championship on July 11 (July 12 in PH) in the UFC 189 pay-per-view headliner, which takes place at the MGM Grand Garden Arena in Las Vegas, Nevada.

McGregor (17-2) is coming off a dominant performance versus Denis Siver at UFC Fight Night 59 as he thumped his German counterpart via second-round technical knockout.

Immediately after the stoppage of Siver, McGregor leaped over the cage wall and confronted Aldo, who was in attendance to see the match.

Since his departure from Cage Warriors Fighting Championship in 2013, McGregor has taken UFC’s 145-pound weight class by storm, winning five-consecutive fights to receive a title shot.

On the other hand, Aldo (25-1) has won seven-straight bouts since entering UFC’s Octagon in April 2011 and becoming the organization’s inaugural featherweight champion.

The 28-year-old Brazilian was last seen in action this past October at UFC 179, where he earned a five-round verdict versus Chad Mendes in a rematch.

Aside from his two victories over Mendes, Aldo also owns notable triumphs against the likes of Ricardo Lamas, Frankie Edgar, Chan Sung Jung, Mark Hominick and Kenny Florian under the UFC banner.

Both men are currently in a self-styled promotional tour, covering eight major cities in 5 countries, where Aldo and McGregor were seen talking smack to each other.

“The rivalry is intense. I’m enjoying the world tour. I think this is the correct way that it needs to be done. We get to see a lot of each other. We get to have a psychological battle everyday,” McGregor shared.

McGregor believes that he is inside the champion’s head and asserted that things would only get worse until the fear consumes Aldo when the two step into the cage.

The 5-foot-8 native of Dublin, Ireland also answered his critics that kept on insisting he bypassed Edgar, who is originally the No. 1 contender for Aldo’s featherweight title.

“People can’t deny KOs and the money. When you’re talking [about] me, you’re talking about KO finishes and millions of dollars. If it’s Frankie versus Jose, they will be fighting in Alabama,” McGregor bragged.

Edgar is scheduled to face Urijah Faber in a featherweight super-fight at UFC’s first Philippine live event numbered as “Fight Night 66” on May 16 at the 20,000-seater SM Mall of Asia Arena in Pasay City, Metro Manila.

The winner of the Edgar-Faber duel could be in line as the potential opponent for the victor of the championship clash between Aldo and McGregor.

“I would take either of them. I think people would rather see the Frankie fight. But if Urijah can win, I guess people would like to see that fight,” McGregor stated.

Despite the seemingly insurmountable odds, McGregor remains optimistic that he could pull off the upset and walk away with the gold-plated strap.

“I’m very confident,” he said. “It wasn’t for me this won’t be happening. I am the one who’s bringing the numbers. Time and time again, I do what has not been done before.” – Rappler.com