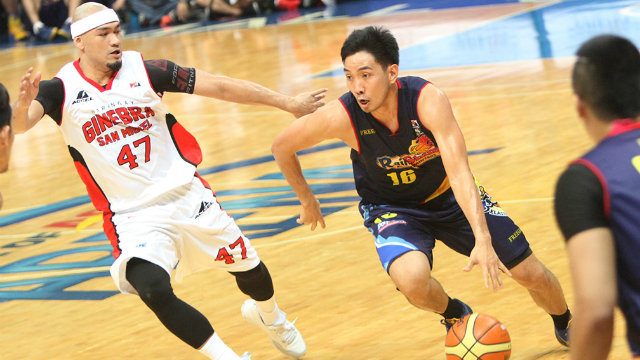 MANILA, Philippines – The PBA Office of the Commissioner suspended a referee for the remainder of the 2015 Commissioner’s Cup Sunday, March 29 for a controversial non-call in the quarterfinals game between Barangay Ginebra and Rain or Shine on Saturday, March 28.

The referee, whose name was withheld in the PBA’s statement, failed to call a crucial shot clock violation on Barangay Ginebra with 8.7 left in the fourth quarter, leading to the game-clinching lay-up by Jeff Chan for the twice-to-beat Rain or Shine.

“A closer look at the play shows that Jeff Chan tapped the ball from Michael Dunigan with .2 second left on the shot clock,” the PBA said in a statement.

“When the ball was tapped away from the hands of Dunigan, this in itself did not constitute a loss of possession on the part of the offensive team and therefore did not stop the shot clock from counting down.

“A closer look at the slow motion replay reveals that Jeff Chan did not have clear and immediate control of the ball after the tap at which time a 24-second violation should have been called by the referees,” the PBA explained.

“Jeff Chan only had clear and immediate control of the ball with his second dribble after the 24 second shot clock had already expired.”

The PBA further explained the rules regarding the shot clock violation.

Chan’s wide open breakway lay-up put the Painters on top for good, 92-91, after Greg Slaughter gave the Gin Kings the lead and made a crucial defensive stop. Ginebra had a chance to salvage the victory and extend their conference in the final possession with 4.6 remaining, but the Gin Kings failed to convert and were eliminated from the playoff chase. Rain or Shine advanced to the semifinals.

Ginebra never protested the controversial call, which was deemed a judgment call and “did not involve an error in technicality that is a ground for protest.

“Disciplinary measures have been taken on the erring game official for a lapse in judgement which involved a call that was not reviewable and correctible under the rules during the game,” the PBA said. – Rappler.com