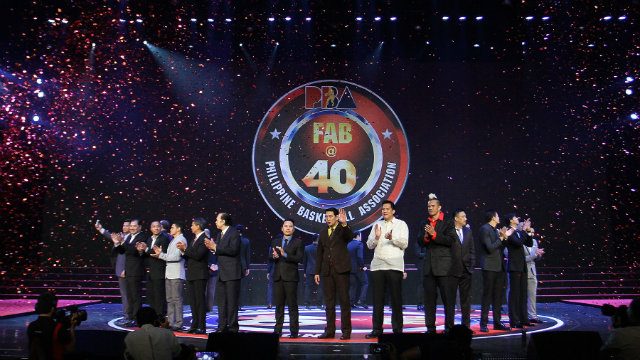 MANILA, Philippines — From retired legends to active players on their way to more greatness, the PBA honored its 40 Greatest Players during its 40th season celebration on Wednesday, April 8 in the Newport Performing Arts Theatre at Resorts World Manila.

The league also celebrated 40 years worth of its history, recognizing fans, past and present officials and governors. The PBA honored as well the original cast of journalists who covered the league in 1975.

“To you, the greatest and best players, who wove the fabric of the PBA’s rich history, I say thank you,” said current commissioner Chito Salud. “Without you, the PBA would just be another league.”

In the program, the PBA also unveiled its plans for the fans this year, which include the production of dog tags, and championship ring replicas; a PBA game app and a PBA app built-in on the myPhone; a PBA documentary to be shown in cinemas; a PBA magazine called Life; and a PBA branded credit card in partnership with the Bank of Commerce.

The additional 15 new names to complete the PBA’s 40 Greatest Players were also enshrined with plaques, commemorative jackets and balls.

“There are more than 40 greatest players, we just had to make that difficult decision to choose,” said current chairman Pato Gregorio. “Please take care of that word ‘greatest’ because the PBA is here to stay, the PBA must continute to grow as we try to reach 50 years.”

The full list of the PBA’s 40 Greatest Players are as follows: