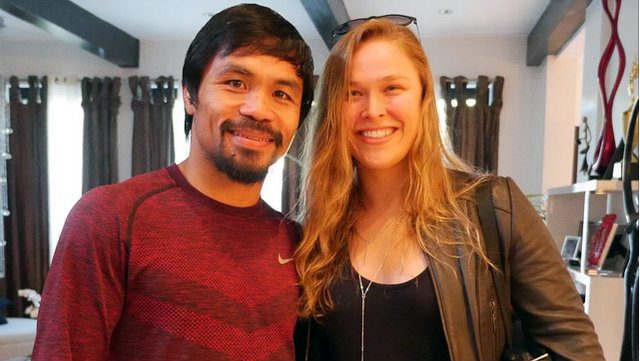 Facebook Twitter Copy URL
Copied
After getting support from Manny Pacquiao prior to her fight vs Cat Zingano, Ronda Rousey returns the favor to the Filipino boxer

MANILA, Philippines – With less than three weeks away from his much-awaited ring encounter against Floyd Mayweather Jr. on May 2 (May 3 in Manila), Manny Pacquiao received another surprise visit from a well-renowned athlete.

UFC women’s bantamweight champion Ronda Rousey took time out of her busy schedule to visit Pacquiao at his home in Los Angeles, California and extend her support for his upcoming welterweight title unification bout with Mayweather at the 16,800-seater MGM Grand Garden Arena in Las Vegas, Nevada.

Thank you for visiting me @rondarousey and for your support. God Bless!

The 36-year-old Filipino boxer is a fan of Rousey and had also expressed his support when she fought Cat Zingano at February’s UFC 184 pay-per-view event, where the former Olympic judoka finished the job in only 14 seconds with her signature armbar submission.

In addition, Pacquiao promised to give Rousey a free ticket to see his 12-round duel with Mayweather despite the limited amount available.

Like Pacquiao, Rousey is likewise in training camp, preparing for her sixth title defense versus Bethe Correia in the main event of UFC 190 on August 1 (August 2 in Manila). – Rappler.com