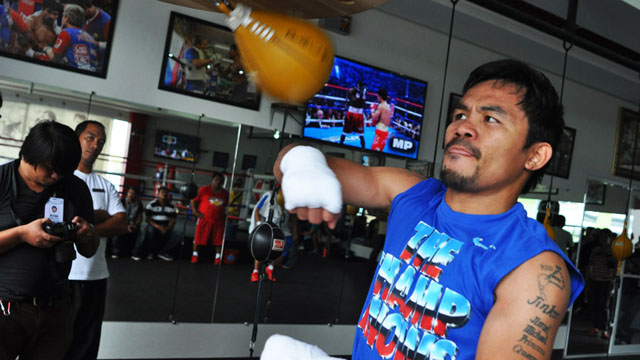 MANILA, Philippines – Manny Pacquiao is a lot of things.

He’s an eight-division boxing champion, making him a certain future Hall of Famer. He’s also a part-time singer, a basketball player and head coach for the KIA Carnival in the PBA and a member of the House of Representatives in the 15th Congress of the Philippines, representing the province of Sarangani.

But Pacquiao, who was elected in 2010, isn’t stopping at being a congressman, or even a senator. According to his promoter Bob Arum, who spoke with TMZ Sports, Pacquiao is planning to run for presidency.

“Forget that,” Arum said. “He’s going to be a president.”

Pacquiao, 36, will be 43 by the time of the 2022 elections, putting him three years older than the 40-years-old age requirement for those running for President of the Philippines.

Pacquiao, it seems, also fits the other qualifications to run, according to the Philippine Constitution, include being a natural born citizen of the Philippines, being able to read and write, being a registered voter, and being a resident of the Philippines for at least 10 years immediately preceding the election

Pacquiao is currently in the middle of his training for his upcoming mega-fight against the undefeated Floyd Mayweather Jr, which will be held on May 2 at the MGM Grand Arena in Las Vegas, Nevada.