Apr 22, 2015 12:24 PM PHT
Nissi Icasiano
Facebook Twitter Copy URL
Copied
The initial design of Pacquiao’s expensive trunks has not been shown yet to the public 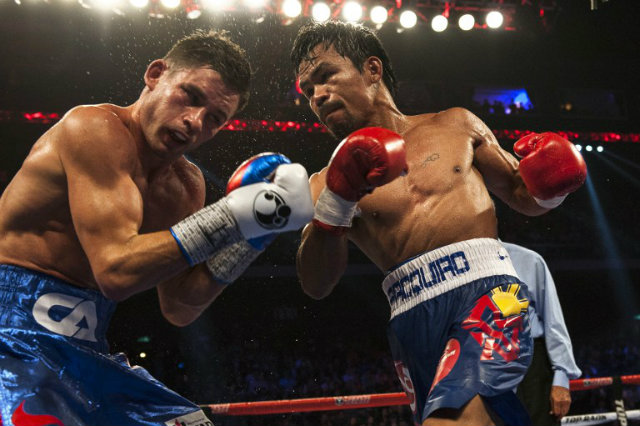 MANILA, Philippines – Even though he is taking home 40% of the super-fight’s revenue, Manny Pacquiao is set to make $2.25 million alone from the sponsorships on his trunks.

Six different companies reportedly bought an advertising space on Pacquiao’s fight shorts that the Filipino boxing icon will wear when he collides with Floyd Mayweather Jr in the ring on May 2 (May 3 in Manila).

The initial design of Pacquiao’s expensive trunks has not been shown yet to the public.

Pacquiao is expected to earn a career-best $120 million purse from the 12-round welterweight showdown at Las Vegas’ MGM Grand Garden Arena that could gross over $300 million courtesy of gate attendance, pay-per-view numbers and sponsorships.

On the other hand, Mayweather will contractually receive a 60% share of the bout’s income and will use a $25,000-worth mouthguard that has gold flakes, diamonds and real $100 bills inside it. – Rappler.com