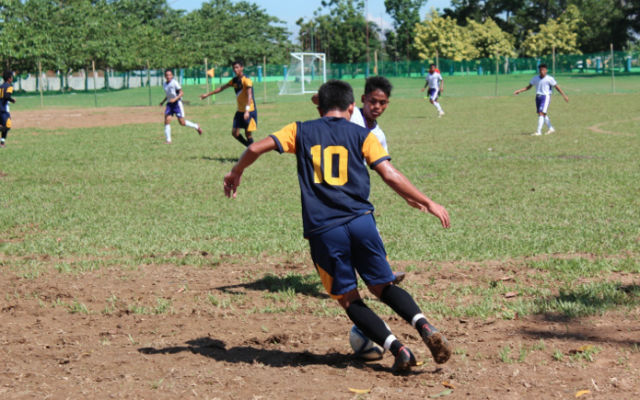 TAGUM CITY, Philippines – There was just no better way to start National Capital Region’s (NCR) campaign for a comeback than how they did it on their first match.

Looking to seek revenge after last year’s heartbreaking 2-0 finals loss to defending football victors Region IV-B, NCR lived up to expectations with a methodical 15-1 whipping of an unproven Region XII side on Sunday, May 3. This, just right after the reigning back-to-back football title holders MIMAROPA dominated CARAGA Region en route to a resounding 15-0 win, to start their title defense at the Energy Park, Tagum City.

The Big City boys dictated the tempo for most of the match, capitalizing on key defensive errors by the Warriors’ backline which led to numerous goal-scoring opportunities for NCR.

“NCR has a lot of experience, unlike our team who had very few matches and tournaments. We just have to give our best,” Region XII head coach said after telling his boys not to be ashamed of the scoreline.

After conceding 7 poorly-defended goals in the first half, the Warriors succumbed to NCR at the start of the second canto, giving up 2 easy goals in less than 3 minutes to worsen their nightmarish performance.

SOCCSKSARGEN looked more promising and resolute since then, managing to keep their opponent’s goal total at 9 for about 20 minutes in the second half after NCR failed to convert on a penalty and several open shots.

But it was not enough to stop NCR from opening the floodgates soon.

Pilipinas Cup Under-17 MVP John Renz Saldivar and NCR stalwart Mark Joseph Arranguez were rampant on the offensive flanks, exploiting the weak defensive backline of Region XII to finish the match with a flurry of goals.

Striker Abdul Jafar Casib was the only bright spot for the Mindanao-based squad, scoring the solitary goal for Region XII in the first half but lacked support from his teammates from that point onwards.

Meanwhile, Region IV-B began their Palaro football title defense by demolishing Caraga who could only watch in awe of the Palawan-based squad in the first game.

NCR and MIMAROPA are among the regional football hotbeds, like Central Visayas and Western Visayas, expected to slug it out for the national crown. – Rappler.com