May 5, 2015 3:53 PM PHT
Ryan Songalia
Facebook Twitter Copy URL
Copied
The attorney general will investigate why Pacquiao’s handlers checked 'no' on their medical questionnaire before the fight 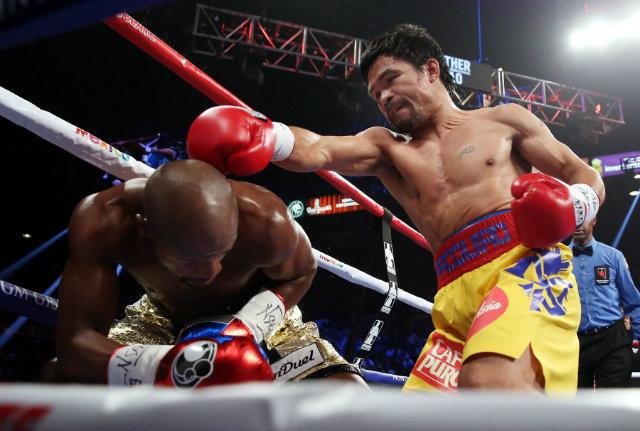 LAS VEGAS, USA – Manny Pacquiao may be hit with disciplinary sanctions for not disclosing his torn right rotator cuff prior to his fight with Floyd Mayweather Jr on Saturday, May 2 (Sunday, May 3 in Manila).

Nevada Athletic Commission chairman Francisco Aguilar told the Associated Press that the attorney general will investigate why Pacquiao’s handlers checked “no” on their medical questionnaire before the fight, which Pacquiao lost by unanimous decision.

According to NAC guideline 467.555, an “unarmed combatant must report certain injuries and illnesses” and submit to a physical examination designated by the commission.

Aguilar told reporters after the fight that Pacquiao (57-6-2, 38 knockouts) had disclosed their use of anti-inflammatory medication before the fight but did not specify a shoulder injury.

A joint statement from Top Rank/Team Pacquiao said that they had informed the United States Anti-Doping Agency about the injury and had been approved for injections of the anesthetics, though the independent performance enhancing-drug testing agency does not handle commission decision-making.  Pacquiao could face a fine and/or suspension from competition in Nevada. – Rappler.com