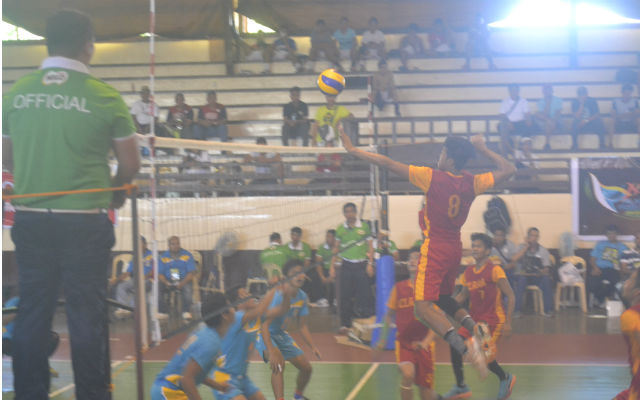 TAGUM CITY, Philippines – Winning for Central Luzon (Region III) has never been easy, but this time, it was just “a piece of cake.”

Aiming to win the gold medal for volleyball in this year’s Palarong Pambansa – after their sloppy performance in Laguna last 2014 – Region III defeated their defenseless opponent Mimaropa (Region IV-B), 2-0 (25-18, 25-19), in the 14th game of the secondary volleyball boys event Tuesday, May 5.

Headed by Coach Joven Canlas, Region III took advantage of the numerous errors committed by Mimaropa during the game. The winning team steered the course of the matches, upgrading their tricky play to fire heavy spikes, and forcing their opponent to lose control of the play with poor blocks and misdirected serves.

Mimaropa’s early uprising in the first set failed to rule the game as Region III unleashed powerful spikes and elusive ball movement which ignited the start of the former’s error trail.

Central Luzon’s Medina and lead blocker Junior Arturo Lopez fuelled the performance of their team – with 12 combined points and 4 blocks – supported by their teammates who capitalized on their height advantage against Mimaropa.

Meanwhile, Region III takes this win as a good start for the long road to championship and redemption. – Rappler.com