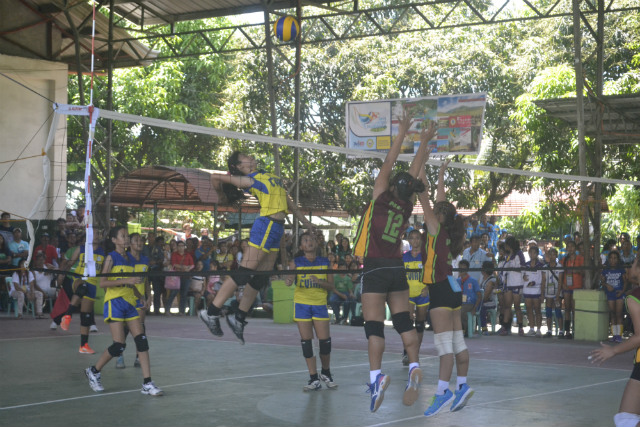 TAGUM CITY, Philippines – Central Visayas lived up to its name as the defending champion of elementary girls volleyball when they proved their supremacy on Tuesday, May 5, winning two sets (25-17, 36-34) over the Davao Eagles.

Pulling the rope of victory on the 17th match of this event, both teams played tug-of-war during the second set as they exchanged their powerful attacks, resulting to 6 deadlock scores.

But Central Visayas stayed wired and plunged the winning point after blocking the spike of Davao Eagles’ Anne Krizza Caasi, 36-34.

After their win against Cordillera Administrative Region on Monday, Central Visayas’ Jimy Jane Jamili grabbed the spotlight again as she connected with an impressive 17-point game performance Tuesday.

Eagles’ team captain Caasi, who defended Davao Region in scoring, lost her good start and missed some of her spikes which went outside the court to Central Visayas’ advantage.

“Desisyon! Desisyon!” yelled the euphoric spectators from Davao Region, urging their players to stretch the game into the third set.

Steered by their coach Dino Aribal, Central Visayas gave no space for Davao Eagles to take revenge and set the play for a third set.

Central Visayas did not consider Davao Eagles’ height advantage as a pitfall and controlled the tempo of the game, creating 17-7 lead in the first set.

The defending champion put pressure on the host region’s squad, who disappointed their supporters by committing several service errors on the second set.

Central Visayas is now in the hot seat since other teams would strive to dethrone CVIRAA as champion.