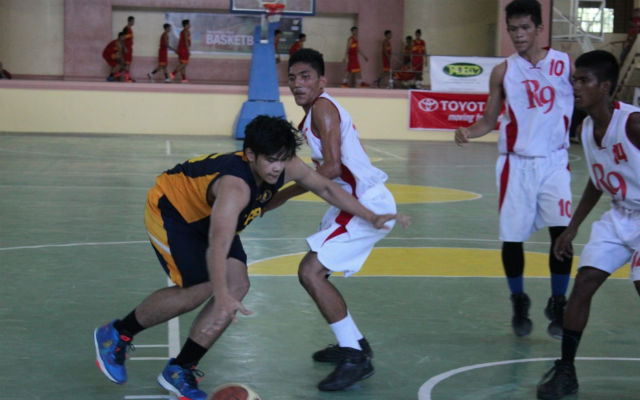 TAGUM CITY, Philippines – It seemed more like a practice game between grown men of the Metro and the boys of Zamboanga rather than a basketball match of regional champions.

Coming off a resounding 84-67 victory over Mimaropa, the National Capital Region (NCR) boys secondary basketball team remains unbeaten as it won 75-35 against Zamboanga Peninsula during their game on Tuesday, May 5 at the University of Southeastern Philippines gym.

Merciless right from the get-go, the hulking NCR squad did not show any compassion for the reedy Zamboangeños who could only hope that the Manileños will somehow miss some of their shots.

(What we thought of despite our lead is to stick with the system of our team to prevent the other team from catching up.)

Moh Sayed Ascaño, who traces his roots in Davao, played the role of a court general for the NCR team together with Joseph Peñaredondo, the point guard of Escuela De Sophia of Caloocan.

They created plays for NCR bigs Mark Anthony Garcia and Shannon Gagate who doomed the pesky interior defense of Zamboanga.

Zamboanga Peninsula coach Gerry Cavan was so frustrated with his players’ lack of effort and focus during the game that he declined to be interviewed after the match.

After establishing an immense 23-point lead just before the halftime break, Dela Cruz from De La Salle Greenhills immediately started the second half with two straight three-point bombs to send the NCR bench into rapture.

It was the defense that spelled the difference for the Big City boys, only enabling a single field goal for the Zamboanga Peninsula natives in the third canto to finally put the nail on the coffin.

The Manila-based squad was supposed to be represented by perennial UAAP Juniors basketball contenders National University (NU) Bullpups in the regional meet.

A conflict in schedule with the UAAP playoffs reportedly led to the inclusion of 2nd placers Chiang Kai Shek, who eventually won and got the rights to represent NCR in Tagum.