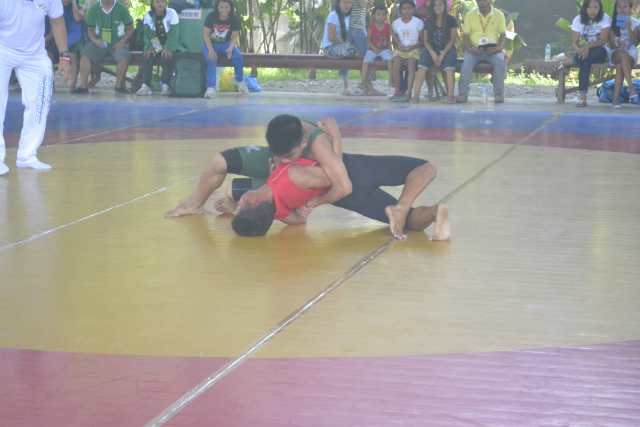 TAGUM CITY, Philippines – As high as the highlands of Cordillera Administrative Region (CAR) was the elation of the region’s wrestlers as they ruled the boys secondary wrestling with two gold medals, one silver, and one bronze on Wednesday, May 6, at Tagum Fundamental Baptist Church Gym.

Nathaniel Gullunan added to the gold tally as he won by pinfall in the 58 kg weight class. Kenneth Mang-uhan and Jess Nyolab also showed their prowess in joint locks and pins by winning silver and bronze in 46 kg and 50 kg weight classes, respectively.

Gamboc does not consider this victory as an overnight miracle since their team had to adjust to the hot weather of Davao del Norte by arriving one week before the Palaro games commenced.

“I even spent my own money to finance the expenses incurred in the training since the financial support is not enough,” said Gamboc, adding that their victory is worth all the efforts and sacrifices.

First-timer Jason Cater grabbed the only gold for the National Capital Region (NCR) by slaughtering Mang-uhan from CAR with a pitfall in the second round of the 46 kg weight class championship match.

Determined to maintain the spot in next year’s Palarong Pambansa, Cater vowed to replicate his perseverance in going through the gruelling training which starts as early as 4 am daily, and involves other investments like enough rest and proper diet.

Now that he successfully passed through the eye of the needle, Cater encouraged his female counterparts to strive hard and bring NCR’s banner to the peak as they compete in the girls secondary wrestling match on Thursday, May 7.