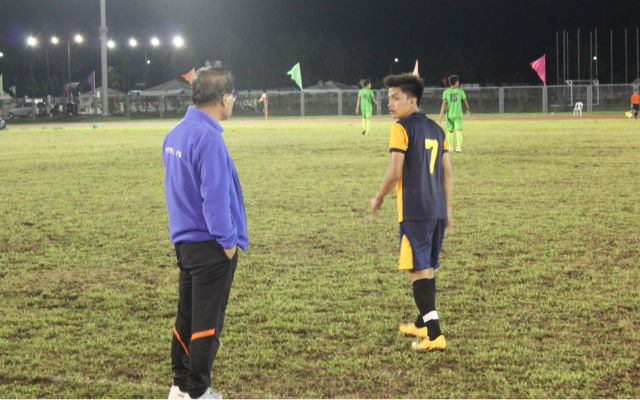 TAGUM CITY, Philippines – The National Capital Region (NCR) football team ended their campaign in the group stages with a lopsided 12-0 thrashing of the winless Cagayan Valley (Region II) to finish on top of Group B in the Palarong Pambansa secondary football event on Wednesday, May 6.

After tallying huge winning margins in their last two games, the Big City squad opened the floodgates right from the first whistle, netting in 12 goals from 5 different players to increase their goal difference to +33.

Javier Augustine Gayoso found the back of the net 5 times, while 4 other players joined the goal-scoring party, highlighted by FC Barcelona-esque passing in front of goal to breakdown a disjointed Cagayan backline.

“Even when we are up by 15 or 20 goals, it does not matter. We still need to stick with our system of play,” NCR’s Korean head coach Kim Chul Su, who also coaches Far Eastern University, said after the match.

The Quezon City-based squad was up against a rather dismissive Region II side, who tried to score from the center circle every time NCR scored. The Cagayan Valley team, who did not even a huddle during the halftime break, are going home without a single win.

After going down by 11 goals midway through the second half, the match saw a peculiar sight in football when NCR starting goalkeeper Christian Betanio played as an outfield player after back-up keeper Dave Parac came in for Gayoso.

Cagayan Valley actually started the second half with much confidence, putting up a string of passes but the lanky Gayoso was just too much to handle for Region II, scoring twice in a minute. – Rappler.com