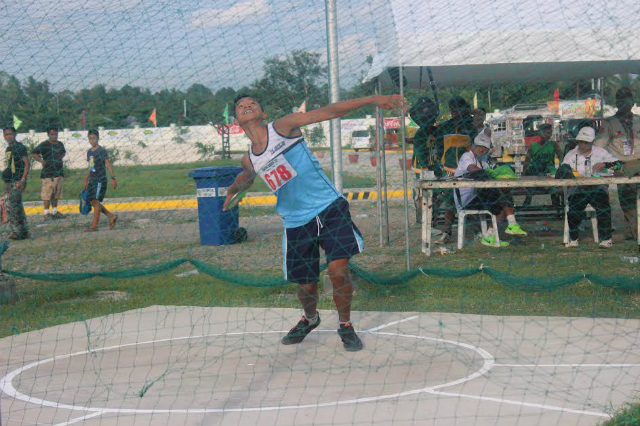 TAGUM CITY, Philippines – After beating his personal best, Western Visayas’ Peter Petipet Jr again ruled the Discus Throw for the elementary boys after igniting a 33.42 meter tally on Wednesday afternoon, May 6, at the DavNor Ports and Tourism complex.

The 13-year-old Ilonggo dominated over rivals from the 17 regions of the country and successfully defended the title of his region in the event.

Petipet, who will be an incoming grade 6 student at Calicuang Elementary School in Dingle, Iloilo, also clinched the bronze medal in High Jump with his 1.55-meter heave.

Despite beating his own record, Petipet failed to break the Palaro record set by National Capital Region’s Sonny Boy Tarnatas during the 2005 Palarong Pambansa: a 36.12 meters tally.

The ongoing Palarong Pambansa is the largest grassroots sporting event in the Philippines that aims to develop the potentials of the youth to become responsible and globally-competitive citizens.

Winning coah Carol Bolivar congratulated his player and had this advice for Palaro atheletes:

(They have to have self-discipline and we encourage them, because these games are their pathway into their future like getting scholarships from different colleges and universities.)

Petipet dedicated his victory to his step-father.

Petipet showed sportsmanship and congratulated all his competitors. He will be heading home with two medals in his neck – both to make his step-father proud. – Rappler.com