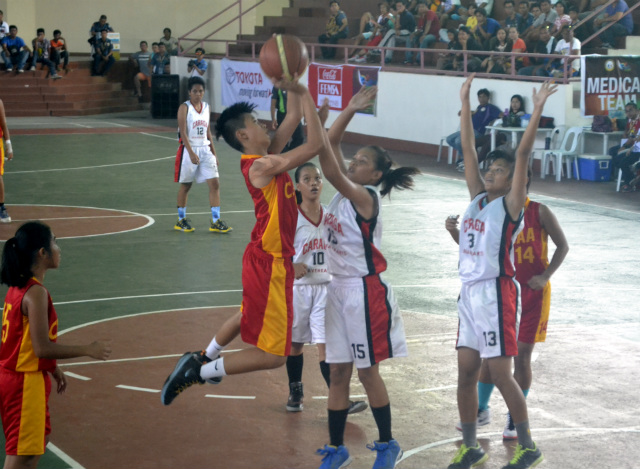 TAGUM CITY, Philippines – The brave-hearted female cagers from Caraga is nothing compared to the might possessed by the players of Central Luzon as they reigned in the quarter finals of girls secondary basketball, 68-56, on Thursday, May 7, at St. Mary’s College Mother Ignacia Multi-Purpose Gym.

After controlling the third game of the quarter finals, Central Luzon advances to the semi-finals to face the 2014 Palarong Pambansa defending champion, the National Capital Region (NCR).

Central Luzon’s standing ‘Big 5’ – Joyce Ramirez, Reynalene Ferrer, Patricia Lopez, Lea Villegas and Reah Badilla – led their team to execute the plays, move the ball, and make the trap which set the tension inside the court, leading Caraga with null during the last 3 minutes of the first half.

Even with their best effort, Caraga failed to resist the defense of Central Luzon, forcing them to commit turnovers in the 3rd and 4th quarter.

But Central Luzon left no room for revenge, as they intensified their offense pinning numerous fast breaks and jump shots.

The rampage of Central Luzon shocked the Caraga crowd further as the jampacked duo of Ramirez and Ferrer took advantage of their height – conquering the low post area which made Central Luzon dominant with rebounds.

Moyco said his team’s defense is weak and needs improvement for their next match against NCR on Friday, May 8.