May 8, 2015 4:57 PM PHT
Ferdin Sanchez
Facebook Twitter Copy URL
Copied
The Manila-based squad frustrates the offensive weapons of Calabarzon with its sticky defense, applying a full-court press for most of the second half 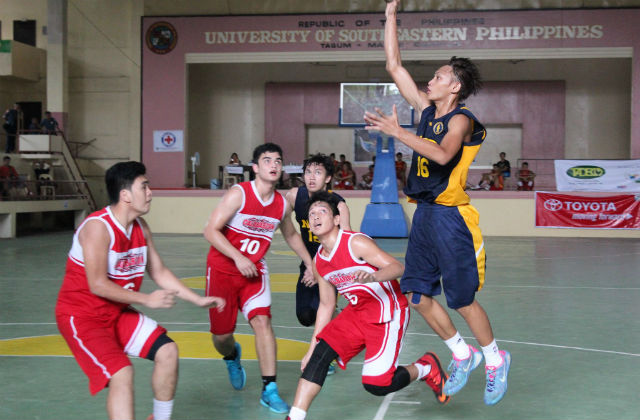 TAGUM CITY, Philippines – Revenge is sweeter the second time around.

After losing a pulsating championship game to Calabarzon in Palarong Pambansa 2014, the National Capital Region (NCR) basketball team made sure not to fall victims to the same predator, gutting out a hard-fought 78-66 win over Region IV-A (Calabarzon) to earn them a spot in the finals in the 2015 games on Friday, May 8.

Up against a squad bolstered by San Beda-Taytay standouts again, the Big City 5 survived a late scare, answering back with crucial shots of their own after waves of comebacks from the gritty Southern Tagalog squad late in the second half.

Chiang Kai Shek High School court general Fran Louie Yu was all over the place, scoring and passing when it mattered the most, en route to a game-high 26 points. Yu was the most reliable shooter from the free-throw line when Calabarzon had no choice but to foul.

“We just prepared ourselves for Calabarzon because we knew they love to run and they have great shooters. Luckily, our defense stepped up and the offense delivered,” NCR coach Goldwin Monteverde said after the match.

The Manila-based squad frustrated the offensive weapons of Calabarzon with its sticky defense, applying a full-court press for most of the second half that translated into numerous turnovers.

Looking to pounce on its sheer height advantage on NCR’s frontline, the 6’6” Bedan slotman John Mark Lagumen created problems inside the paint, relentlessly banging up the undersized NCR bigs Shannon Gagate and Mark Garcia but failed to have an impact in the last quarter.

As the lead ballooned to as much as 13 points midway through the last canto, Calabarzon, with a sense of urgency, rallied back to trim down the lead back to single digits. But NCR spitfire guard Moh Sayed Ascaño sank a 3-point bomb while being fouled, sending the crowd into frenzy.

It was tightly-contested in the first 3 quarters but NCR started to pull away in the fourth after Batang Gilas mainstay Michael Dela Cruz scored back-to-back triples to extend their lead.

The NCR squad, composed mostly of Chiang Kai Shek stalwarts, is set to face a feisty Central Luzon side, which includes 16 year-old 6’8’’ big man Jeremiah Pangalangan in its talented roster, on Saturday, May 9

The Palarong Pambansa is the largest grassroots sporting event in the Philippines that aims to develop the potentials of the youth to become responsible and globally competitive citizens. – Rappler.com