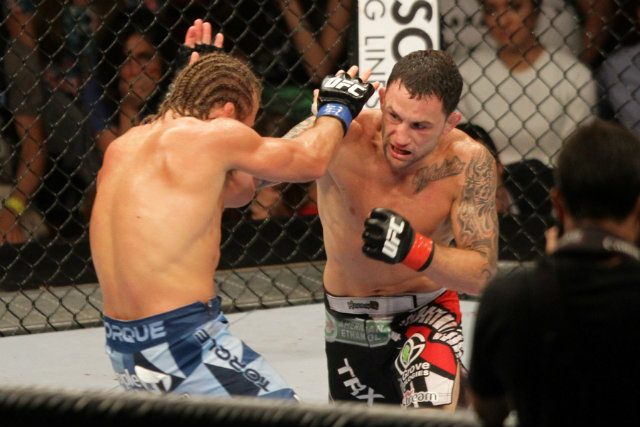 MANILA, Philippines – Frankie Edgar solidified his status as the next contender for the featherweight championship by outpointing Urijah Faber in the main event of UFC Fight Night 66 on Saturday, May 16 at the 20,000-seater SM Mall of Asia Arena in Pasay City, Metro Manila.

All three judges scored the 145-pound fight with identical marks of 50-45, handing Faber his first-ever defeat in non-title fights.

In the first two rounds, it was a stand-up trade between two decorated fighters from the lower weight classes as Edgar repeatedly launched sharp boxing combinations and landed a spinning wheel-kick to the body, while Faber responded with a sneaky hook to the temple.

As Faber tailgated Edgar to compel the 33-year-old native of Toms River, New Jersey to move backwards, the latter surprisingly resorted to his wrestling pedigree and scooped his foe to the mat

Faber opened a floodgate of blood from Edgar’s nose when he smacked a solid knee at the start of the second stanza.

However, Edgar returned the favor by delivering a left hook-right straight combination before lashing a head kick to Faber’s head.

“The California Kid” tried to confuse Edgar by switching his stance from orthodox to southpaw, but “The Answer” shrugged it off and cleanly countered an overhand right.

Edgar changed the tone of his attack in the third frame, where he shot for a double-leg takedown, but Faber converted it his signature guillotine choke.

The former UFC lightweight titleholder found the escape door and transitioned to side control, allowing him to put Faber back to the floor with a belly-to-belly drag.

Edgar smoothly cruised in the last two periods, where he threw a well-timed roundhouse kick and scored two more takedown to secure the victory.

With the dominant win over Faber, Edgar (19-4) becomes the right challenger to face the winner of the featherweight championship clash between current titleholder Jose Aldo and Conor McGregor on July 11 (July 12 in PH).