MANILA, Philippines –  As the Philippines seeks to improve its 7th place finish at the 2013 Southeast Asian Games, it will be relying on strong performances from nearly 200 female athletes who are competing in Singapore.

Cynthia Carrion, the Philippines’ SEA Games Deputy chef de mission, accompanied approximately 70 of the country’s athletes on their send-off at NAIA Terminal 3 on Wednesday afternoon, June 3. The event was organized by Singapore Airlines, the official airline partner of the 28th SEA Games.

The Philippine Olympic Committee executive reminded each of the athletes, which included members of the sepak takraw, shooting and softball teams, that they would be seen as ambassadors at the event. She took a moment to remind the women’s softball team of that in particular.

“Smile girls,” Carrion reminded them, as they broke into shy laughter. Carrion, who also heads the Gymnastics Association of the Philippines, is confident the Philippines can win up to 50 gold medals – in honor of Singapore’s 50th anniversary, she jested – due to the 459-strong athlete representation from the Philippines. At the last SEA Games in Myanmar, the Philippines sent only 210 and bagged 29 golds.

Of those athletes, 189 are women, but Carrion would like to see an equal number of delegates from both genders, in terms of athletes and officials.

“Even all the boards of NSAs, I count how many women do you have? You have to have women in the board checking them,” said Carrion. “My board is all women, only one man. Baliktad.” 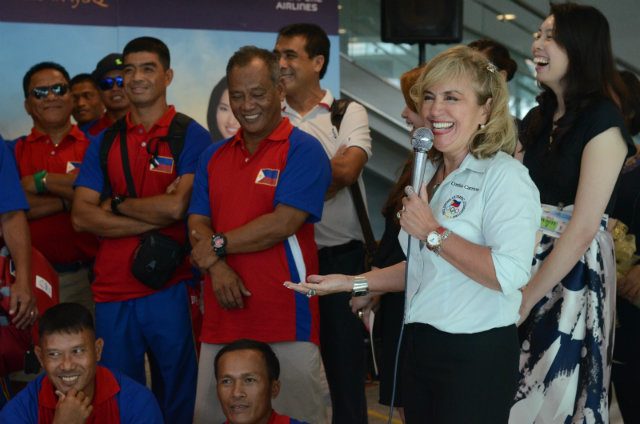 In many ways, the women have already made their presence felt among Philippine athletes. The women’s volleyball team, comprised of UAAP and NCAA standouts who have become media darlings from their television exposure, has generated as much, or more, interest as the men’s basketball team traditionally dominates headlines.

Ateneo’s Alyssa Valdez, a reigning MVP in the UAAP volleyball tournament and Shakey’s V-League, will be the nation’s flag-bearer at the SEA Games opening ceremony on Friday. Valdez is arguably among the handful of most popular athletes in the country today.

The boxing team, which is already among the strongest in the region, will feature 4 women, including light flyweight Josie Gabuco, flyweight Irish Magno, bantamweight Nesthy Petechio and lightweight Riza Pasuit. Rubilen Amit, who boasts 5 golds among her 8 SEA Games medals since 2005, will be defending her 10-ball women’s title.

Carrion also has high hopes for Ava Verdeflor, the 16-year-old Fil-Am gymnast who finished 11th at the 2014 Youth Olympic Games in Nanjing, China.

It was a female athlete – reigning UAAP fencing champ Justine Tinio – who won the Philippines its first medal at the 2015 SEA Games, earning a silver on Wednesday.

Media equality has been an issue for Carrion, who said that the men’s basketball team gets the star treatment while the female hoops squad – known as Perlas Pilipinas – gets virtually no coverage. With Philippine supporters hoping for a strong showing as the region nears ASEAN integration, nothing catches the eye like the glisten of gold.

“The Philippine Olympic Committee and the Philippine Sports Commission gave them all the tools they need for the first time. They really went through conditioning, strengthening exercises. Now it’s up to them to perform up to their best,” said Carrion. – Rappler.com