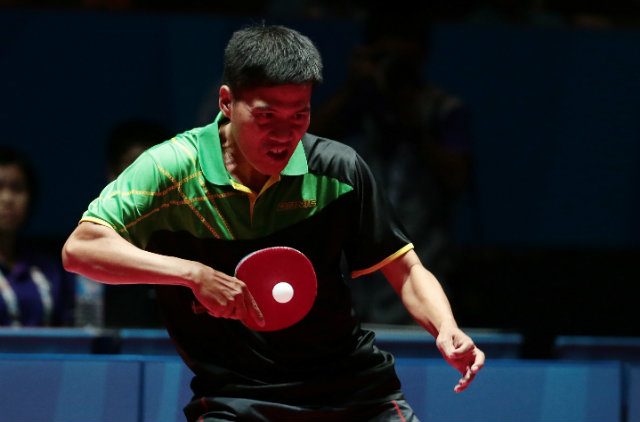 SINGAPORE – Veteran table tennis player Richard Gonzales and fencer Harlene Raguin had been here once before: playing for the gold medal in the Southeast Asian Games and a chance for glory in a sport that fans hardly take a second look back home.

But both crumbled in the crunch, losing to their respective opponents in the men’s table tennis and women’s epee finals to add two more silvers to the medal collection of the Philippines in the 28th Singapore SEA Games on Thursday, June 4, here.

Against an opponent she had beaten in the semifinals of the same event in the 2007 Thailand SEAG, Raguin surrendered a 5-3 first-round lead to Vietnam’s Van Tri Len, who came surging back to bag the gold 11-7 as time expired in the third and final round

After a riveting seven-set battle in the finals to Singapore’s Clarence Zhe Yu, Gonzales also lost to another Singaporean, Gao Ning, who bagged his fourth consecutive gold with a lopsided 11-6, 11-9, 9-11, 11-3 victory.

Gonzales likewise duplicated his best SEA Games performance of a silver in the 2005 Philippine SEA Games.

Nathan Perez had earlier taken the bronze medal in the men’s individual foil after losing a hairline 14-15 decision Vietnam’s Nguyen Min Quang in the semifinals.

Emerson Segui, the other Filipino bet in the the men’s foil and who won gold in the in the Thailand Games, exited as early as the quarterfinals.

The duo of Alyssa Salvador and Jemimah Tiambeng, making their SEA Games debut, continued to be out of their depth in synchronized swimming and finished sixth and last in the free routine finals finals with 53.0333 points.

The SEA Games take a respite tomorrow, Friday, with the opening ceremonies at the Singapore National Stadium before hostilities go full throttle on Saturday.