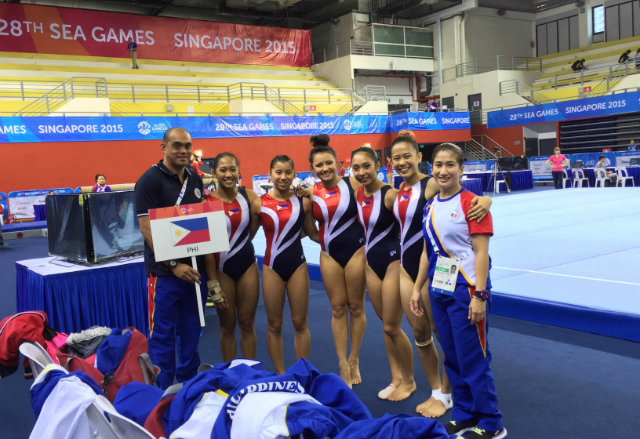 SINGAPORE – Usually in the Southeast Asian Games, the athletes are the stars of the show, but there are also many other interesting personalities behind the scenes.

As the Philippine Women’s Gymnastics Team walks into the Bishan Sports Hall for the pre-games Podium Training, you might see a team of six girls marching in. They are actually just a team of five, with national team coach Jasmin Valenton-Ortega blending in quite nicely with the girls, most mistaking her for a gymnast.

Coach Jas, as the girls fondly call her, just recently re-joined the team as National Coach in January, after a coaching stint with the Singapore American Community Action Council.

Coach Jas has unique insight into this experience for the girls as she herself was a multiple-time gold medalist in both the 1991 SEA Games held in Manila, and the 1993 SEA Games held here in Singapore. Coaching the Women’s Team alongside her is assistant coach Aldrin Castañeda, himself a silver medalist in the 1993 Singapore Games. It has really come full circle for the both of them.

As Coach Aldrin is fond of reminding, Singapore in 1993 was his first travel abroad as an athlete, and Singapore 2015 is his first as National Coach. Entering the hall, they exchange hugs with Indonesia’s head coach, their competitor those many years ago as gymnasts, now coaching their respective teams as friends.

These two, teammates once upon a time, are now working together once more to help re-build Philippine Gymnastics. The gymnastics competition starts today, June 6, at Bishan Sports Hall. – Rappler.com