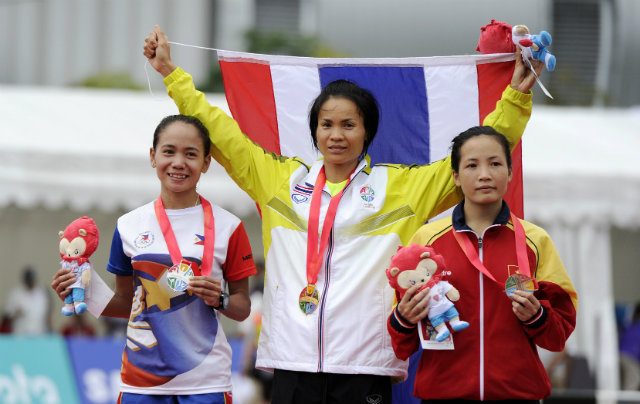 MANILA, Philippines – Misfortune befell veteran Eduardo Buenavista in the rain and wind as the Philippines began its campaign in track and field in the Southeast Asian Games in Singapore on Sunday, June 7.

Buenavista, who had the fastest time of 2:24.11 in the event this year, threw up at the 30 kilometer mark while he was in the lead with archrival Boonthung Srisung of Thailand and faded to fifth place, according to distance coach Ojon Artiaga in a Facebook message.

But Mary Joy Tabal unexpectedly finished second as she hung on in the women’s marathon, earning silver with a time of 3:04.39, 1:14 behind Thai gold medalist Jane Vongvorachoti.

Male competitor Soh Rui Yong overcame the elements to win in 2:34.56, becoming the second Singaporean to win the marathon. So surged past Srisung in the last few kilometers. Srisung was second in 2:35.09 followed by Hoang Nguyen Thanh of Vietnam in 2:37.10

Buenavista was fifth in 2:39.26 and some athletics sources say it may be time for him at age of 36 to hang up his running shoes.

The 35-year-old Thannaronawat Nattatya of Thailand spurted ahead of Tabal with one kilometer left. When Tabal entered the oval, her foe was approaching the final curve and headed to the finish, dzSR said.

The athletics squad is eyeing 10 golds in the SEA Games, with half of them from Fil-Ams. Eric Cray, number one in the region in the 400 meter hurdles, will run in the 100 meters. Caleb Stuart is expected to rule the hammer and shot put, Kayla Richarson or Princess Joy Griffey the 100 or 200 meters. – Rappler.com