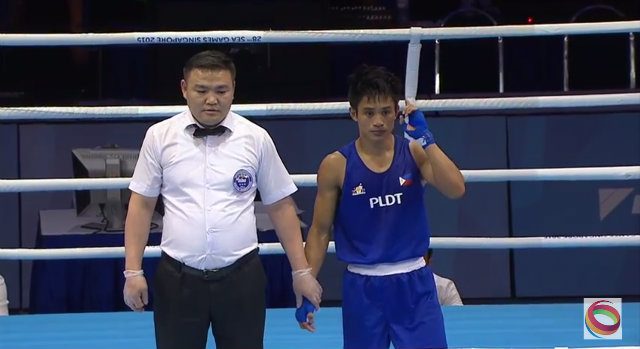 Facebook Twitter Copy URL
Copied
Philippine flyweight Ian Clark Bautista left no room for controversy in his semifinal match, knocking Thongbang Seauaphom out for the count with one left hook

MANILA, Philippines – What’s one way to avoid the scoring controversies that seem to plague every amateur boxing tournament? Knock your opponent out.

That’s what Philippine boxer Ian Clark Bautista did on Monday, June 8 in his flyweight semifinal match, knocking Thongbang Seauaphom of Laos down for the count at 1:13 of the second round with a flush left hook to the jaw at the Southeast Asian Games in Singapore.

Bautista, 20, of Binalbagan, Negros Occidental, Philippines had been robbed of a chance to medal at the Incheon Asian Games in 2014 when Choe Sangdon of host nation South Korea was given a dubious points verdict over him.

Bautista made a big statement the day before as well, winning a 2-1 decision over defending SEA Games champion and 2012 Olympian Chatchai Butdee of Thailand.