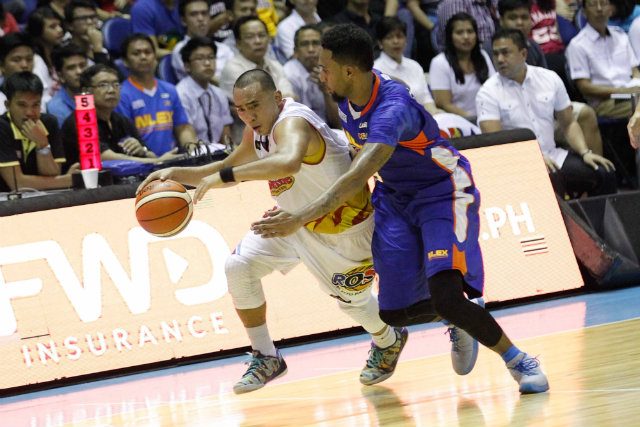 MANILA, Philippines – The Rain or Shine Elasto Painters withstood a brutal 29-point comeback from the NLEX Road Warriors and escaped with a 106-102 triumph in the 2015 PBA Governors’ Cup on Wednesday, June 10 at the Smart Araneta Coliseum.

“It’s a lesson for us and we will take that lesson and learn from it,” head coach Yeng Guiao said. “We’re in a 3-game winning streak and that’s a positive thing out of this win.”

Wednell McKines hit a team-high 33 points, grabbed 20 rebounds and had two blocks for Rain or Shine, which evened its record at 4-4.

Racing to catch up to the top 4 by the playoffs, Rain or Shine blew a 29-point lead late in the third quarter and left the door wide open for NLEX to try and steal one as a John Wilson corner triple knotted the count at 91-all.

Jeff Chan and Chris Tiu then scored 7 straight to pacify the rally, 98-91, but two three-pointers from Michael Madanly gave NLEX hope, 102-99, with 1:06 remaining.

The 34-year old Syrian import spared NLEX one last glimmer of hope as he fired his fourth three-pointer to make it 104-102 with 9.6 ticks left after Tiu, who provided quality minutes off the bench in the payoff period, assisted for a turnaround basket McKines for the cushion.

Lee sealed the win with a pair of free throws.

“They gave us a big scare,” said Guiao, whose team led by 86-66 entering the final frame. “We lost our composure for a while, it’s a good thing we were able to recover in time. We were a little overconfident when we had a really big lead and we paid for it.”

Madanly poured 16 points in the fourth and buried all of his triples in the same quarter to lead the Road Warriors with 20 points.

Five other players from NLEX finished in double figures including big man Asi Taulava with his 16 points and 10 rebounds. Though Taulava was scoreless in the last period.

Mark Cardona, KG Canaleta and Enrico Villanueva each had 14 points while Wilson added 12, as NLEX slid to 2-6.