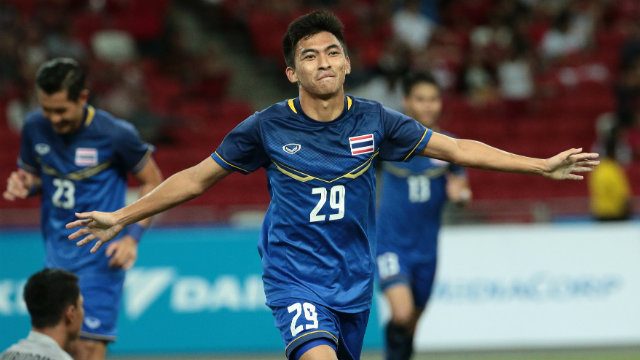 Facebook Twitter Copy URL
Copied
Thailand pushed ahead of host nation Singapore on Saturday, amassing a total of 78 gold medals to Singapore's 74 ahead of the highly anticipated football final

SINGAPORE – Thailand stormed into the football final and pushed ahead on the medals table on Saturday as they looked to finish on top for the second Southeast Asian (SEA) Games running.

The defending football champions brushed off Indonesia 5-0 to set up a final with Myanmar, who had luck on their side as they shocked Vietnam 2-1 in Singapore.

Thailand also had wins in tennis, archery, taekwondo and petanque as they reached 78 gold medals late on Saturday, four ahead of Singapore with three days to go.

The hosts had led the medals table until Friday, thanks in large part to their 23 golds in the pool – including nine for Olympic prospect Joseph Schooling.

They gathered another four on Saturday in waterskiing and sailing, but a shattering men’s hockey loss to arch-rivals Malaysia will not have improved the mood of home fans.

The final, in front of a packed crowd at Sengkang Stadium, ended 2-2 but Malaysia triumphed 4-3 in the shoot-out, rounded off by Nor Azrul Abdul Rahman’s confident score.

“The team dealt brilliantly with the pressure,” Malaysia coach Arul Anthoni told AFP. “I had four or five of the younger players who were shivering earlier because of feeling the atmosphere.”

At the National Stadium, “Messi Jay” Chanathip Songkrasin put the seal on a thumping 5-0 win over Indonesia as Thailand stormed into Monday’s football final.

Chanathip, glowingly compared to Barcelona superstar Lionel Messi, scored in the last minute to round off an emphatic semi-final victory in Singapore.

The scale and manner of the win will install Thailand as raging favorites for Monday’s final against dark horses Myanmar, who rode their luck in the upset of Vietnam.

It also gives Indonesia a chastening send-off into the international wilderness after they were suspended by world body FIFA over political interference.

“We are not Barcelona – we get gold first and then we talk,” Chanathip said.

Earlier, even Myanmar’s coach Kyi Lwin was surprised by their 2-1 win over Vietnam, which came courtesy of a first-half penalty and a wickedly deflected winner.

“I feel very surprised about the result and I would like to thank all our players,” said Myanmar’s coach Kyi Lwin.

Elsewhere, Malaysia’s Yoong family of waterskiers grabbed three medals as 11-year-old Aaliyah took silver in the women’s jump and ex-racing driver Alex, 38, got bronze in both the men’s jump and slalom.

Thailand topped the medals table at the last SEA Games in Myanmar in 2013. Malaysia, who will host the 2017 edition, lie fourth 45 with golds, 20 behind third-placed Vietnam.