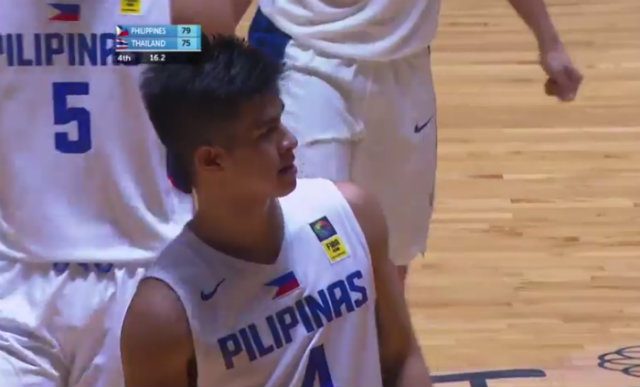 MANILA, Philippines – The Gilas Cadets were stunned early, but pulled out a life-and-death battle against Thailand with a 80-75 victory in their Southeast Asian Games semifinal match on Sunday, June 14 in Singapore.

Coming off a 105-point thumping of Timor-Leste, the Gilas Cadets must have felt invincible as they approached their game with Thailand.

That aura was quickly shattered when they found themselves down 43-33 at halftime in Singapore.

With naturalized center Marcus Douthit hobbled from a second quarter ankle turn and the foul calls quickly piling up against the 16-time SEA Games hoops champs, heroes needed to emerge. And those heroes were Almond Vosotros and Troy Rosario. With Thailand looking to hand the Philippines its first elimination at the SEA Games since 1989, UAAP MVP Kiefer Ravena shut out the lights with a clutch 3-pointer with 16.2 seconds to go to put the Philippines up 79-75. The Philippines hit one more free-throw to arrive at the final score.

The team captain Ravena finished with 12 points and 3 assists. NU star Glenn Khobuntin, who scored 5 points, was ejected at the 5:56 mark of the fourth quarter.

The Philippines hurt its cause by turning the ball over 22 times, compared to just 16 from Thailand, but out-rebounded Thailand 51-27.

The Philippines will play the winner of the Singapore vs Indonesia semifinal match tonight for the gold medal on Monday, while Thailand plays the loser in the bronze medal match that same day.

The Philippines has won every SEA Games basketball gold medal except for one since joining the subcontinental meet in 1977. Malaysia upset the Philippines in 1989 to win that year’s gold.