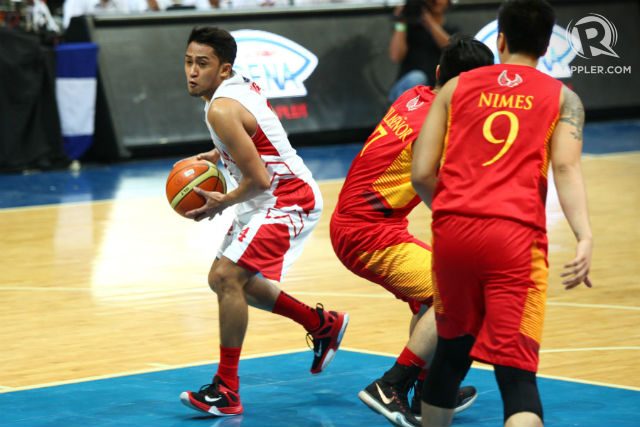 MANILA, Philippines – The San Beda Red Lions are off to a quick start in their bid for a sixth straight NCAA senior’s basketball championship after taking down the Mapua Cardinals, 102-89, on opening day for the league’s 91st season on Saturday, June 27, at the Mall of Asia Arena.

Playing without Baser Amer and Ola Adeogun, San Beda raced off to a quick 19-4 start in the first quarter and stayed in control of the lead the rest of the way.

The closest Mapua was able to get was at 40-38 towards the end of the second period, but the Cardinals were unable to get over the hump and take the lead at any point in the contest.

“You’re happy, of course. You’re happy for yourself but most important is you’re happy that your boys performed. Your boys, the players, your sons, they gave it their best,” San Beda head coach Jamike Jarin said after the game. It was the former youth national head coach’s first career win calling the shots for the Red Lions.

“It’s not all about who’s our number one player,” he said about his team’s depth and ability to win without Adeogun (hamstring) and Amer (shoulder), “it’s all about from number one to number 15. So anyone from our team can deliver… it’s a team effort all the time.”

Mapua was led by the 23 points and 7 rebounds of Josan Nimes, who after playing well in the first two quarters went quiet in the second half.

“That was the key,” Jarin said about limiting Nimes’ production. “If my memory serves me right, he [had] 17 points in the first half. I have to give credit – it was a team effort. Micole Solera did a magnificent job on him start of the second half but did a terrible [job] on him in the first half.”

Allwell Oraeme and Andretti Stevens pitched in 13 points apiece in the loss for the Cardinals.

The Red Lions will aim to go 2-0 when they go up against Emilio Aguinaldo College on Thursday, July 2. Mapua will also be action on the same day when they take on San Sebastian.