Ruenroeng (16-0, 5 knockouts) was credited with two knockdowns against Casimero (21-3, 13 KOs), beginning with a counter right in round two that caught the 25-year-old from Ormoc City, Philippines lunging in. A second knockdown was called in round 7 when Casimero was pushed into the ropes by Ruenroeng following a glancing right hand.

Casimero appeared to knock Ruenroeng down in round 3 when a counter left hook caused his glove to touch the canvas, but referee Larry Doggett ruled it a slip.

The fight was marred by excessive clinching and over a dozen throw downs by Ruenroeng. Doggett issued 5 warnings before finally taking a point from Ruenroeng in round 11, long after the fight had been decided.

The roughhouse tactics detracted from an otherwise crafty, resourceful performance from the Thai incumbent champion, whose jab disrupted the rhythm of Casimero, who held the IBF junior flyweight title for two years before being stripped last year for failing to make weight for his fight with Mauricio Fuentes. 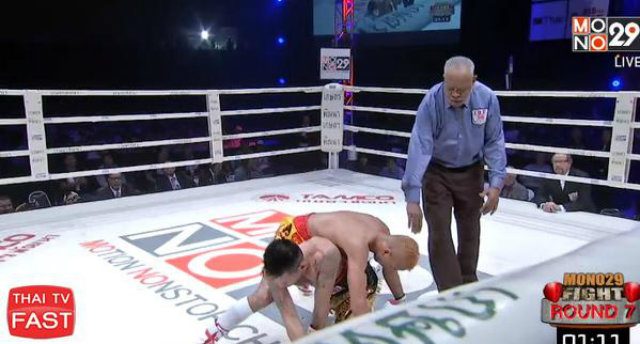 Casimero was the aggressor for the final 3 rounds, desperately trying to score a knockout to erase the deficit he found himself in.

Ruenroeng, 35, has now defended his belt 4 times successfully since winning it in January of 2014 with a victory over Filipino contender Rocky Fuentes.

On the undercard, Denver Cuello scored a fifth round technical knockout of Indonesia’s Boy Tanto. Cuello (36-5-6, 24 KOs) dropped Tanto (9-17, 1 KO) in the third and fifth rounds before the referee waved the fight off.

Cuello’s manager/trainer Jaro says that his fighter, who is rated no. 1 by the WBC at 105 pounds, has been promised a shot at WBC strawweight titleholder Wanheng Menayothin before the end of the year.