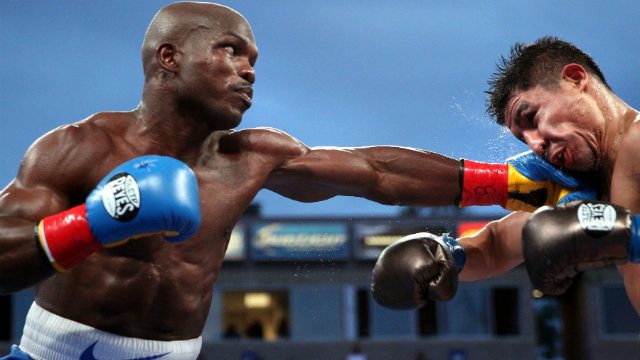 MANILA, Philippines – Timothy Bradley captured the interim WBO welterweight title with a unanimous decision victory over previously unbeaten fighter Jessie Vargas on Sunday, June 28 Manila time. But it wasn’t without its own controversy.

Bradley was comfortably ahead with 22 seconds remaining in the 12-round fight at the StubHub Center in Carson, Calif. when a right hand from Vargas wobbled the two-division champion. As Bradley clinched with just 10 seconds to go, referee Pat Russell stepped in to stop the fight.

Not because Bradley was hurt; he thought the 10-second warning was the final bell.

“I thought I heard the bell. The fight was over when the bell went off,” said the 67-year-old Russell.

Bradley (32-1-1, 12 knockouts) now holds the interim version of the title Floyd Mayweather Jr won when he defeated Manny Pacquiao in May. Vargas (26-1, 9 KOs), who held the WBA junior welterweight title before moving up in weight, was considered a possible opponent for Pacquiao’s comeback efforts.

“I think we all acknowledge that it was an honest mistake, but those 10 seconds cost me the fight,” said Vargas, who was trained by former Pacquiao opponent Erik Morales for this fight.

Bradley told Vargas on air that he would be open to a rematch with Vargas.