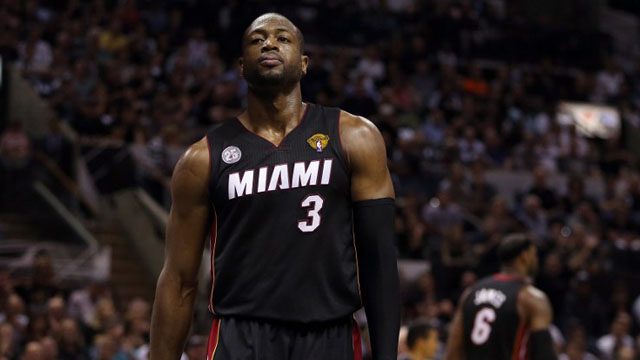 Facebook Twitter Copy URL
Copied
The 3-time NBA champion Wade is reportedly seeking $60 million over 3 years, but the Heat aren't too keen on that big of a contract

MANILA, Philippines – Miami Heat guard Dwyane Wade has opted out of the final year of his contract (worth $16.1 million) and will become an unrestricted free agent on Wednesday, July 1, according to multiple sources.

Wade, 33, is reportedly seeking a long-term deal – $60 million over 3 years – according to the Miami Herald. The 3-time NBA champion opted out of the final two years of his contract last offseason – worth $42 million – to give the Heat greater cap flexibility to try and rebuild after LeBron James left for the Cleveland Cavaliers.

ESPN reported at the time that Wade’s deal was worth $31.1 million over two years, which equals an $11 million pay cut.

Shortly after, Chris Bosh signed a 5-year, $118 million deal with the team.

The Heat were reportedly hoping Wade, who averaged 21.5 points and 4.8 assists per game last year, would opt in and then work on a new deal after the season, where they could then work out a deal after the 2015-16 season, when superstar players Kevin Durant and Anthony Davis become free agents.

“The one player that’s had to sacrifice for the sake of winning has been [Wade],” Heat President Pat Riley was quoted by the Miami Herald. “This is now getting down to business. We respect him. We want him back. We want him here for the rest of his career. And we’re going to try to do everything to make that happen.”

Wade has played all 12 of his NBA seasons with the Heat but has battled injuries in recent years, missing 48 games over the past two seasons.

One player the Heat won’t have to worry about this offseason is Luol Deng, who opted in on the final year of his two year, $20 million offer on Tuesday, June 30 Manila time. Deng joins Bosh and Josh McRoberts as the only Heat players currently signed through 2016.

ESPN’s Marc Stein reports that Goran Dragic is “basically a lock” to re-sign with Miami, the team he was traded to by the Phoenix Suns in February. – Rappler.com