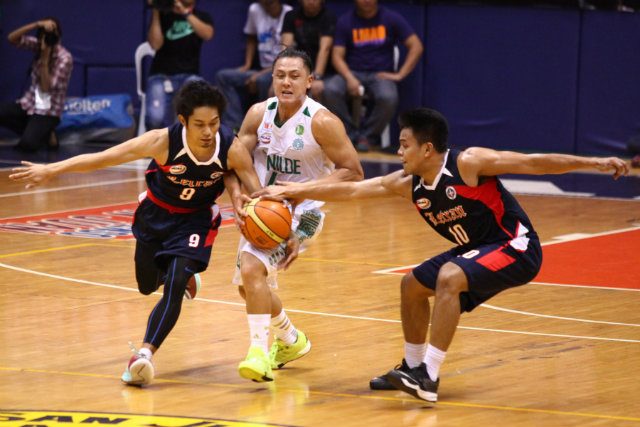 MANILA, Philippines – Pint-sized though he is, Mark Cruz is more than ready to take charge for the Colegio de San Juan de Letran Knights in its bid to reclaim lost glory in NCAA Season 91 of the men’s basketball tournament.

The 5-foot-6 playmaker is one of the smallest guys in the league but is a battle-tested veteran who is determined to leave his mark one last time.

(Before the game I talked to the team. I told them I really wanted to end my last playing year on a winning note, with a good result.)

On the diminutive guard’s square shoulders rests the huge amount of pressure to carry a squad fallen from Final Four grace last season after back-to-back Finals appearances. But head coach Aldin Ayo has no doubt Cruz can rise to the challenge.

“He may be the smallest but he has the biggest heart,” Ayo said, noting Cruz will have help in fellow veterans Kevin Racal and Rey Nambatac. “He’s our leader.”

Cruz, wanting to end the Knights’ heartbreak, puts effort into the little things such as motivating and encouraging his teammates, especially the 6 rookies.

(I talked to them about poise. I told them that even if they are rookies, they should show poise no matter how hard they are pressured by opponents.)

This season, however, Letran will have its work cut out for them with a serious height disadvantage in comparison to other teams, many of which are reinforced by imports. The Knights’ tallest player is 6-foot-5 rookie center Christian Balagasay.

But the squad was off to a great start in their season debut versus the College of St. Benilde, showing a preview of how Letran plans to offset their lack of ceiling.

After pounding the Blazers, 82-53, on Tuesday, June 30, Ayo talked about playing chaotic basketball on both sides of the ball. He wants his players to be extremely active and never relent on gang rebounding.

(We want to be chaotic. We don’t want conventional basketball. Every time we get the ball, we want to have chaos.)

Ayo, who describes the Heavy Bombers as a “well-structured” team, aims to disrupt them with the Knights’ brand of chaotic basketball. Not even JRU’s massive frontline will daunt them.

“Gusto namin guluhin sila (We want to throw them into disarray),” he said. – Rappler.com