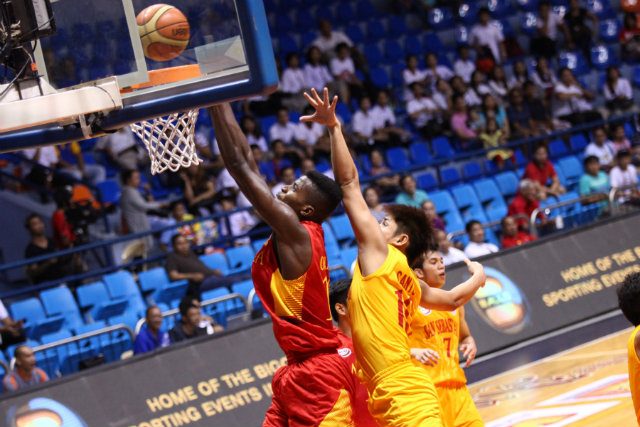 MANILA, Philippines – Despite being down in the first two quarters, the Mapua Cardinals rallied back in the second half to defeat the San Sebastian Golden Stags, 88-86, in a thrilling contest on Thursday, July 2 at the Filoil Flying V Arena in San Juan.

The Intramuros-based dribblers were trailing by nine points, 50-41, at the end of the second period, but Mapua changed the tune of the game in the final half with the help of Allwell Oraeme, who had a monstrous performance of 15 markers, 22 boards, and eight blocks.

Denniel Jay Aguirre’s three-pointer in the dying seconds of the third canto gave the Cardinals their first taste of the lead, 67-65.

However, Mapua lost their two-point edge in the fourth quarter when SSC-R’s Ryan Costelo and Jerick Fabian shifted back the momentum on their side and regained the lead, 80-71.

Starting guard Carlos Isit served as the hero for the red-and-yellow troop when he drilled two free throws with 21.6 seconds to play in the fourth period, giving Mapua an 87-86 advantage.

Isit earned a trip to the foul line after receiving a long pass from Nimes and getting fouled by San Sebastian’s ace gunner Jamil Ortouste.

Ryan Costelo, Bradwyn Guinto and Michael Calisaan attempted to give back the lead to San Sebastian, but three of them were denied by Mapua’s defense, including a pivotal shot block by Oraeme.

Darrell Menina managed to split his two charities with 6.2 seconds left in the regulation, prompting his teammates to keep a keen eye on Ortouste and force the SSC-R’s reliable scorer to commit a disappointing turnover.

Although San Sebastian lost their first outing for this season, Ortouste led the Stags with 21 points, nine rebounds, and eight assists.

On the other hand, Mapua claimed their first win in the double round-robin elimination of the NCAA Season 91 men’s senior basketball tourney after bowing down to the San Beda Red Lions on opening day.