San Miguel rallies to steal Game 1 from Rain or Shine 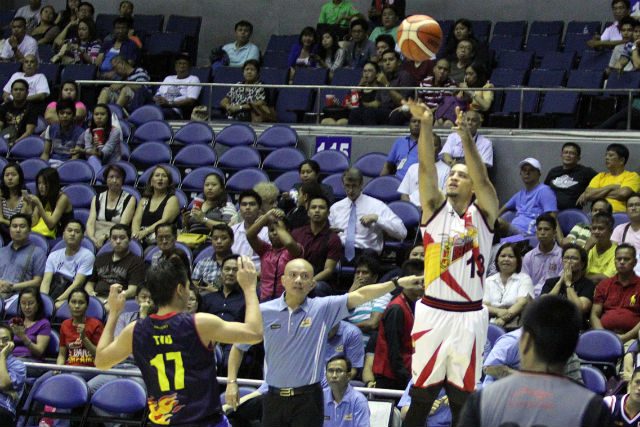 MANILA, Philippines (UPDATED) – The San Miguel Beermen looked bruised and defeated in the first half against the Rain or Shine Elasto Painters, who entered Game 1 of their semifinal series looking like the more confident team despite having a lower seed.

But once the third quarter started, it was a totally different ballgame. San Miguel switched to a zone defense, forced the Elasto Painters into taking and missing jumpers, and eventually came away with a 101-95 win for a 1-0 series lead on Thursday, July 2, at the Smart Araneta Coliseum.

“This is unbelievable for us,” San Miguel head coach Leo Austria said after the game, where his Beermen trailed 43-19 at one point in the first half. “We were down by more than 20 points and we were able to catch up and eventually win the game.”

San Miguel had a lot of contributors – each of their starters scored in double-figures led by Marcio Lassiter and Arizona Reid, who both put up 22 points. Reid also had 13 boards and 8 assists, and hit two critical baskets down the stretch that sealed the win for his team.

Alex Cabagnot and Arwind Santos were great in the second half and combined for 28 points, while June Mar Fajardo registered 20 points and 10 rebounds despite battling foul trouble.

“We did not go to the specific player for the big man because it seems they were really prepared for our big men. But our shooters, especially Alex and Marcio, delivered,” Austria said.

Rain or Shine was led by Wendell McKines, who had 33 points and 16 rebounds. Paul Lee pitched in 19 points and grabbed 7 boards. The Elasto Painters scored only 35 points in the final two quarters after putting up 60 on the scoreboard in the first half.

“It’s very obvious they want June Mar out of the shaded area and June Mar could not contain his man especially with Paul Lee doing the pick and roll. And he’s so deadly; he’s really good… that’s our main problem. That’s why we switched to zone,” said Austria, who also admitted the change in defensive philosophy was an idea pitched by one of his assistants.

The game went down to the wire after a basket by McKines countered a Cabagnot 3-pointer to tie the game at 95-all with 4:40 remaining. Unfortunately for Rain or Shine, they were held scoreless the rest of the way.

It was a floater by Lassiter that broke the tie with 3:08 remaining. After Jireh Ibanes missed a shot, Reid scored in the post on the next possession to extend the Beermen’s lead to 4.

Rain or Shine had opportunities to trim into the lead, but Jeff Chan misfired on a triple and McKines missed two free throws. With 47 seconds to go, Reid scored in the paint again to put the finishing touches on the game.

Game 2 of the series is on Saturday, July 4.

The Elasto Painters took 45 3-point attempts but converted on just 11, while their opponents went 9-of-30. Although they outscored the Beermen on points off turnovers – 15-16 – San Miguel won the battle in the paint, 44-36.

Beau Belga scored 12 points and grabbed 6 rebounds despite spraining his ankle in the first half. He returned in the third quarter and is expected to be fine moving forward in the series. Raymond Almazan finished with 10 points.