Austria worries over Beermen’s energy, lack of preparation for Finals 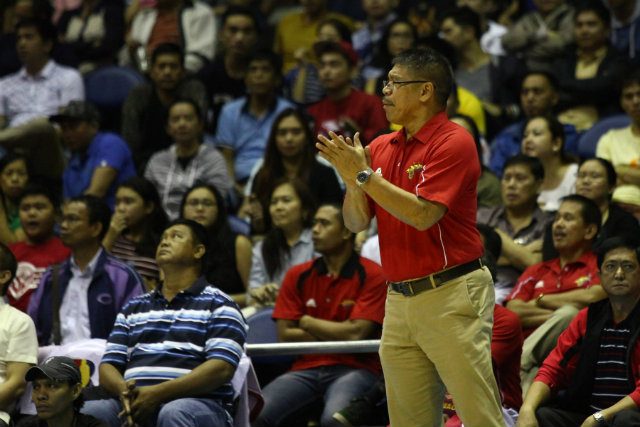 MANILA, Philippines – Going up against an old Finals foe dead set on vengeance is bad enough. But having just one day to prepare for an all-out war only makes it worse.

San Miguel Beer head coach Leo Austria expressed concern over his team’s lack of preparation and dipping energy as they go into battle Friday, July 10, against the dangerous Alaska Aces in a best-of-7 Finals series in the 2015 PBA Governors’ Cup.

“My worry is the energy of the players because we never had a day off since the start of the playoffs,” he said with a frown right after his team closed out Rain or Shine in a 4-game semifinals, 117-110, on Wednesday, July 8.

“For me it’s really a disadvantage (having one-day rest) because we’re relying on the scouting but how can we scout them (Alaska) if we’re focused on Rain or Shine and we have one day only to prepare for the first game? We don’t know yet what to do.”

The Aces and the Beermen open a rematch of the Philippine Cup Finals on Friday with a defensive-minded Alaska looking deadlier and more learned than ever, especially with its hard-working and efficient import Romeo Travis in tow.

San Miguel, on the other hand, is likewise a force in their own right with a monstrous Arizona Reid paired with reigning MVP June Mar Fajardo fueling its overwhelming offense.

But rest will likely be the difference-maker with Alaska enjoying a 3-day advantage as they swept the Star Hotshots in their semifinals bracket on Sunday, July 5.

“The problem really is our preparation. We don’t have ample time to trace all the things that made them a winner,” Austria lamented, adding that he hopes both their imports will cancel each other out in the series.

“But they’re playing really well. A very cohesive team. They’re on a roll. They have the momentum,” he added of the top-seeded Aces, whom they edged out in the season-opening conference in 7 grueling games.

All of Austria’s starters put on a dominating performance and finished in double figures but at the cost of playing heavy minutes. Arwind Santos, Alex Cabagnot, Marcio Lassiter, Reid and Fajardo all logged in more than 35 minutes as the Beermen’s bench contributed just 14 points Wednesday night.

(They have the advantage because they got to rest. One day is not enough. You saw the game it was so physical and so tiring.)

“Alaska keeps on winning because of their suffocating defense and they keep on running,” Austria pointed out. “So how can we sustain our running against Alaska?”

Thursday’s practice session will consist of a walk-through, viewing, and preparing every player mentally.

“My worry is really the energy and after the winning this game, their tendency is they might relax because this is a best-of-7 series,” he added. “But if they want to win, I think energy is not a problem.”

As Alaska seeks vindication from a tough loss from months past, San Miguel aims for redemption from a forgettable Commissioner’s Cup as the fallen champions.

“It might be a vengeance or vindication for them because they lost to us in the 7-game series but this is a different ball game,” said an exhausted though determined Austria. “They have an import, we have an import. I think who has the biggest heart and the will to win will be the one to prevail.” – Rappler.com