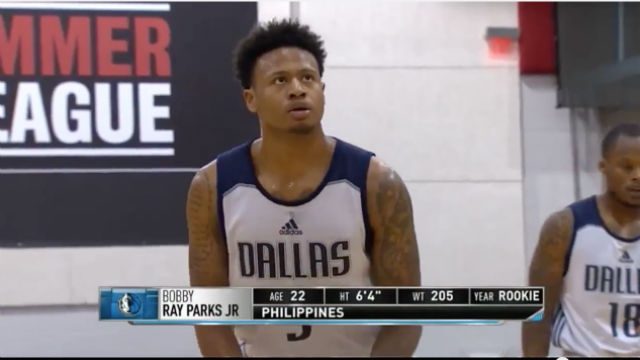 MANILA, Philippines – Bobby Ray Parks Jr had his best game yet in the NBA Las Vegas Summer League, scoring 10 points in the Dallas Mavericks’ 104-88 victory over the D-League selection team on Friday, July 17, at the Cox Pavilion in Las Vegas, Nevada.

In 21 minutes and 6 seconds of action, Parks also recorded 5 rebounds, 4 steals, and an assist while going 3-of-7 from the field and 4-of-4 from the foul line.

Parks, who scored 3 points against the Lakers on Thursday after scoring just a total of one point in his first 3 games of the tournament, registered his first shot on Friday via a putback in the third period.

The former two-time UAAP MVP also finished with a +/- of +8, meaning the Mavericks outscored their opponents by that number the whole time he was in the game.

Most of Parks’ points came via drives to the rim which ended in him making floaters or getting fouled for trips to the free throw line. Parks’ lone assist was a nifty pass on the break where he found an open man in the paint.

Justin Anderson had 23 points and 5 rebounds to lead Dallas, who also received 22 points each from from Dwight Powell and Maalik Wayns. – Rappler.com