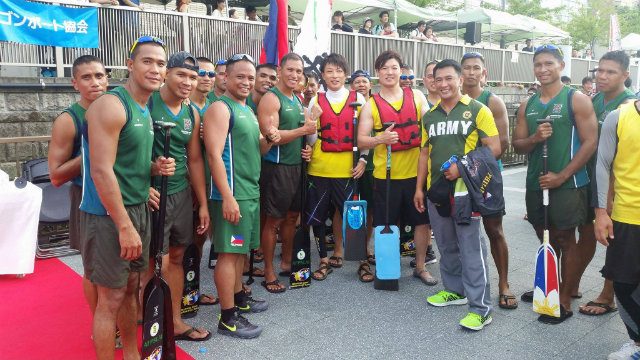 MANILA, Philippines – The Philippine Army earned another prestigious championship, finishing first out of 17 teams in the men’s 250-meter race at the Japan Dragon Boat Championships in Osaka, Japan Sunday, July 19.

The team posted an average heat time of 53 seconds, paddling against the current on the Okawa River for the final 100 meters before finishing one second ahead of the Japanese National Team – 5 of whom the Philippine Army had previously trained. Team manager Lieutenant Colonel Harold Cabunoc said the team was not used to paddling with life jackets, as was required by the Japanese organizers.

“I am very proud because we have proven to everyone that the Philippine Army can successfully conquer the international sports arena if given a chance,” said Cabunoc. “Our team’s discipline and positive attitude made the difference.”

“Our strength is our comradeship and unit discipline. We are stronger if we train and compete together without any outsider who is unfamiliar to the group,” said Cabunoc. For now, the team is celebrating with Japanese food and are set to return to the Philippines on July 21, where a congratulatory ceremony awaits them.