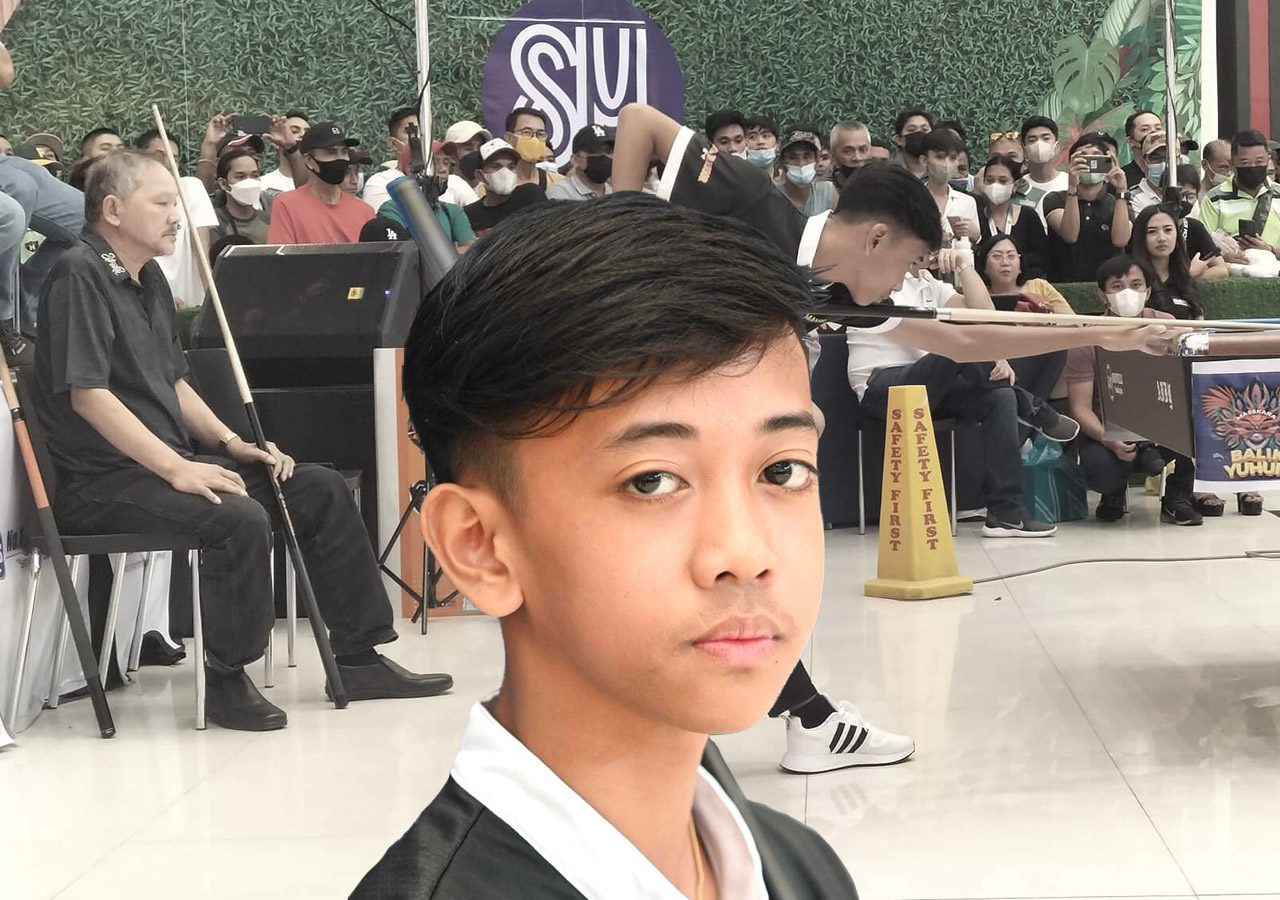 Manas lost in the round of 16 to Jundel Mazon, the former 2010 Guinness World Series of Pool 10-Ball Challenge champion, in an 8-7 decision.

The rising teen, who also defeated national team player Warren Kiamco, 8-7, in the round or 32 Thursday morning, remained upbeat after his loss.

“Talo, panalo, may aral kang makukuha (Win or lose, you learn something),” Manas told reporters after the match.

He said playing with legends and peers he respects inspires him to do better.

Before he faced off with Reyes, Manas also booted out another billiards’ champion, Jerico Banares, in an earlier game.

Tournament organizers said this is AJ’s first open/professional tournament and just the fourth competition in his career after participating in three amateur events.

In an interview, AJ said he started playing billiards at the age of seven in his grandfather’s joint in Antipolo.

The young player dreams of being part of the national team so he “can see the world” and eventually help his family.

Local writer Junel Ray M. Britanico said the 64-knockout game between Manas and Reyes was “full of tension” though it was not the only upset of the day.

Another seeded billiards’ player, Dennis Orcollo, who ranks fifth in the country, was also eliminated by Cebuano pride, Boots Augusto, in a tight fight that ended at 8-7.

“When Reyes took the turn to cue the ball, there was silence in the atrium and every missed shot the champ did was met with a stunned reaction from the audience. Yet, Reyes who is known as ‘The Magician’ gamely laughed off every mistake he made,” Britanico recalled.

Britanico said Reyes was four balls shy of winning the game, when he missed a corner shot on the 10th ball, ending his tournament run and the chance to pocket the grand prize of P350,000.

In the end, “even Reyes looked shocked at the outcome as he walked away from the table, seemingly dejected. However, he returned back to his chair after a while to greet fans, signed autographs, and took selfies with them,” Britanico added.

Thousands shared and reacted to news of Manas beating Reyes.

Many said even Reyes cannot wield his magic forever, but offered comfort and pledges to always remember him as The Legend.

Even Manas showed his awe.

“It is an honor to have played against the legend. I hope to be under his tutelage someday,” he said.

Asked what he learned from Efren, “I have been following him closely and like him, whenever I play, I do not rush, I think of my moves and I focus in between breaks.”

Johann Chua, a winner of gold and silver medals in the last Southeast Asian Games, and one of the players who entered the quarterfinals, praised Manas’ skills and advised him to continue practicing and participating in more tournaments.

“Billiards is really a small world. It is enriching for us to play against the masters. It is the best way to enhance one’s skills,” said Chua. – Rappler.com