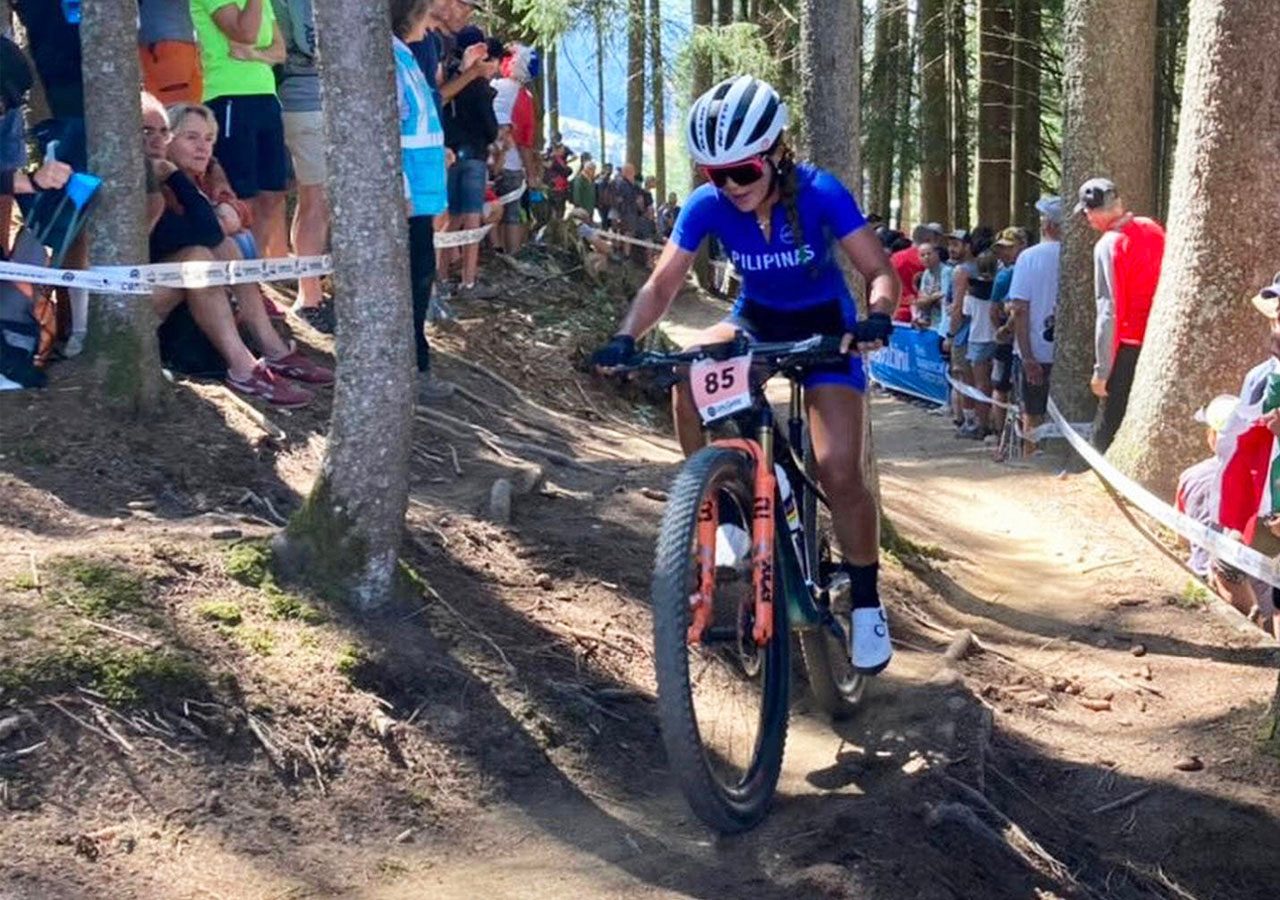 RIDER NO. 85. Ariana Evangelista rides through a section of forest undergrowth during the cross-country championships in Les Gets.

Facebook Twitter Copy URL
Copied
The Philippines' queen of trails talks about her solo stint in the world champs, her rekindled love for the sport, and her hopes for the future of Philippine cycling

The Philippines’ “queen of trails” Ariana Evangelista is the first Filipina to represent the country in the UCI Mountain Bike World Championships in Les Gets, France.

Despite the feat that stoked national pride, Evangelista went solo in France.  With no support crew, a companion to help her track read, or even a mechanic to make sure her bike worked perfectly come D-Day, Ariana was left on her own to figure out how best to ride the race for the rainbow jersey.

“I’d never ridden anything like it in the Philippines,” the Ilongga biker told Rappler in an interview a week after her stint in the world championships in France.

Les Gets is a mountain village and ski resort known for its bike trails. Its track is a regular destination during the world cup season, the mountain bike racing series sanctioned by the Union Cycliste Internationale, cycling’s world governing body.

This year, Les Gets hosted the world championships for downhill and cross-country racing.

“It was actually quite scary and I’m used to doing track reads where I have someone with me who can catch me if I try out a section,” Evangelista said, sharing her experience. The track in Les Gets features challenging climbs, technical descents, roots and rock sections – all unfamiliar to Evangelista.

Because it is a technical track, riding full gas from the start requires strategy, good choice of lines, as well as the advantage of being in front at the start line. Because she has the least amount of UCI points, Ariana started at the last row.

For the short track, Ariana only finished four out of nine laps. In the Olympic cross-country, the main event, she was unable to finish five laps, pulling out of the race after finishing two laps.

“I kind of expected that already,” Ariana admitted.

Aside from the unfamiliarity of the trail, Evangelista also had to cope with the lack of support. “Being just a one-man team sucks in a way but I have learned the hard way. I make do [with] the opportunity given. Of course there’s no point in wishful thinking,” she said.

Evangelista still had things to be grateful for despite the odds stacked against her. For one, spectators at the event also cheered her on.

“When I was racing, I didn’t feel alone, or I didn’t feel so left out, because everyone was just really supporting everyone,” she said. “And it’s funny because they were really surprised that there was a Filipina racing.”

Evangelista never had an inkling that she would participate in such a prestigious competition, especially after a particularly difficult year.

“I didn’t expect – like a year ago – that I would be able to join the world champs,” she said. “The past year has been really hard. I’ve gone through a rollercoaster of emotions.”

When asked to elaborate, Evangelista only alluded to the person who used to handle her career.

“We really have different perspectives and the other person was…controlling or egoistic in a way that wasn’t healthy for my career. And when I had the opportunity to leave, I took it without knowing – without having any security for myself,” she said.

With a fresh outlook and her newfound independence, Evangelista said she’s enjoying cycling now more than ever in her 14-year career. The Les Gets competition became a kind of light at the end of a dark period in the athlete’s personal and professional life.

After a lackluster performance in the 2021 Southeast Asian Games and contracting COVID-19 earlier this year, Evangelista rode to a dramatic victory in Cebu in the national championships in June, defending her title for the fifth year in a row.

Since then, she only had two months to prepare for the race of a lifetime, unsure if she could even go.

“I wasn’t sure if I was gonna go because funding was really difficult to get,” she recalled. “So I was like: I’m gonna prepare for it whether I can go or not because if I go, at least I’m ready, and if I wasn’t able to go, at least I’m still at a good fitness level.”

Training sessions would usually take her to Timberland Heights where she does her high intensity training, to Boso-Boso and Sierra Madre for long rides with lots of climbs, and to the gym where she does her strength and conditioning training to increase cycling power.

It was in the same month of the world champs that Evangelista acquired her French visa. Private sponsors including Dan’s/Trek Bikes Philippines and Nitto Tire helped pay for her airfare, accommodations, and transportation. She arrived in France on August 23, just five days before the race.

After a week off the bike, Evangelista is now ready to train specifically for future races. If she meets the right people and gets enough funding, she would participate in the whole UCI world cup season.

She had discussed some changes in her training program with her Spanish coach Javier Sola. They’re looking at longer intensity drills and gym time, and they still have to work doubly hard on her skills and find high altitude areas to train in, she said.

All these plans will prepare her so that by 2023, she would gain the necessary points, training, and experience to qualify for the 2024 Paris Olympics. “I still want to be an Olympian,” Evangelista said as she talked about sponsors and the next world cup season.

But as her latest endeavor abroad would reveal, it’s not only the athlete that needs to improve, but the level of support Philippine cycling gives to athletes.

“Overall, I’m really grateful that I did it…. It’s something that I wanna share [with] my fellow Filipinos who also aspire to go through the path that I went,” Ariana shared. “There are so many talented Filipino cyclists who aren’t just given the opportunity to showcase their talents.”

Changing the landscape for future Filipino cyclists is a daunting task. But as Ariana would say, it all starts from the heart.

“It is a great sport. It changed my life in a really great way. And [it] would be great to see [more] Filipinos to experience the same thing as well.” – Rappler.com