Facebook Twitter Copy URL
Copied
‘The team accepted me for who I am really easily, and it has been fun so far,’ says Kai Sotto of his stint with the Adelaide 36ers

The Adelaide 36ers earned a great boost to the start of their Australia National Basketball League (NBL) season by copping the Blitz preseason championship off a 72-67 win against the Brisbane Bullets on Sunday, November 28.

With the win to finish with a clean 4-0 slate, the 36ers topped the league ladder after earning 5 points, 3 for winning the game, and 2 for outscoring Brisbane in the second and fourth quarters, for a total of 21.5.

The Bullets ultimately settled for second place with 19.5 markers in the point-based tournament.

Although the 36ers gave fans a glimpse of their winning culture in the preseason, they did so mostly without their prized Filipino recruit Kai Sotto, who was ultimately benched for all but one of Adelaide’s games due to health reasons. 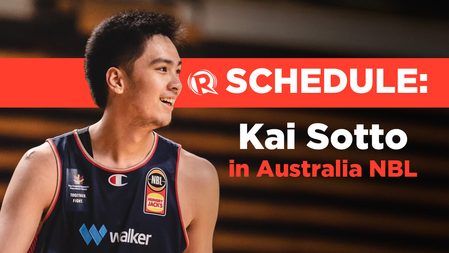 While team management maintained since the start that the roster would be deployed carefully and regularly shuffled, a vocal minority of Pinoy fans still left a trail of toxic comments and video dislikes in their wake whenever Sotto would be benched.

Fortunately for Sotto’s rabid fan base, the time for sitting out may finally be over as the 7-foot-3 unicorn is expected to make his true professional debut on Friday, December 3, as the 36ers visit the Perth Wildcats for their first regular season game.

More importantly, both Sotto and head coach CJ Bruton are on the same page regarding the long-term goal of the team, and have had no issues regarding the preseason benching whatsoever.

“The team accepted me for who I am really easily, and it has been fun so far,” Sotto said in a press conference hosted by Tap Sports.

“I’m really happy that I signed with the 36ers, and to be here in the city of Adelaide. Everything has been pretty much amazing, and I’m very happy to be where I am.”

“Kai’s approach, it’s been amazing,” Bruton added. “Being a young kid to adapt and learn on the fly, he’s grown leaps and bounds from where he was at the start.”

“Right now, it’s just Kai being the best player he can be at this point in time, and to continue to work on his body and his skills, and understanding our system itself, and on the floor.”

Sotto, who is still aspiring to be the first full-blooded Pinoy NBA player, will have no shortage of mentors in his NBL journey as he is currently joined by skilled big men such as Daniel Johnson, and former NBA players Isaac Humphries and Cameron Bairstow. – Rappler.com