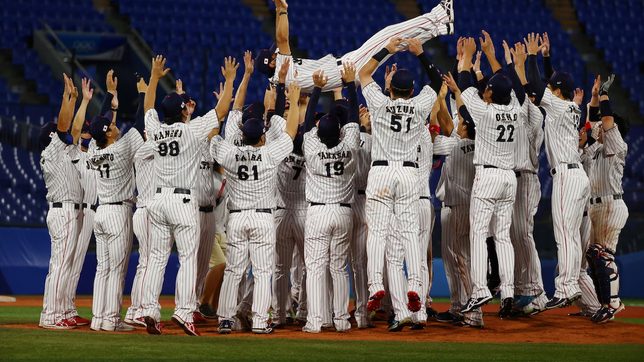 CELEBRATION. Team Japan celebrate after winning the gold medal match in baseball at the Tokyo Olympics on Saturday, August 7.

Japan won their first Olympic gold medal in baseball by beating the United States 2-0 on Saturday, August 7, furnishing a long-awaited crown for their country’s most broadcast and beloved sport and denying their foes a second title.

“The color of the medal was so wonderful,” Japan coach Atsunori Inaba said of the moment he draped it round his neck. “It was so heavy and I felt the win.”

He also felt a weight off his shoulders.

Local organizers returned baseball to the Games for the first time since Beijing 2008, when the Japanese team came fourth, to show the world that their team, amid a growing cross-pollination of players between the US and Japan, is the best.

Japan’s Muneteka Murakami split a pitching duel in favor of the hosts by homering off an outside change-up from US starter and Japanese league pro Nick Martinez in the third inning.

“He hit my best pitch,” Martinez said. “Really nothing much you can do about it.”

A throwing error by US center fielder Jack Lopez on an eighth-inning single enabled Tetsuto Yamada to score the other run.

Five Japanese pitchers, led by starter Masato Morishita, held the US to six hits as Martinez paced the US dugout hoping in vain for a break-through blast.

Inaba said the game showed Japanese-style baseball, driven by pitching, speed and boring hits, triumphs compared to the flashier approach of the Americans.

Attendance was limited to a couple of hundred sporting officials because of COVID-19 restrictions. But the Japanese players hopped a dozen times in a swarm on the mound to commemorate an undefeated run in the six-team tournament.

“We had high expectations from everyone,” he said. “But playing for the gold under the pressure has become an important asset of my baseball life.”

As Japan’s softball team had done to their coach last week after winning gold in a similar 2-0 win over the US, the baseball team rested Inaba flat on their hands and pushed him towards a sky that fortunately never delivered the forecast rain.

The baseball triumph came against a US roster restricted by North America’s Major League Baseball (MLB) from drafting top-flight players. While those rules also limited Japan’s picks, their roster drew entirely from the cream of Nippon Professional Baseball (NPB).

For many in Japan, the gold medal – adding to a past silver and two bronze – shows NPB deserves equal global attention like MLB and avoided the disappointment of finishing second again.

The teams had not met for gold before because Cuba, who failed to qualify this year, had taken a final slot in each of baseball’s five earlier Olympic appearances.

Five innings of tension followed Murakami’s homer, with both sides struggling to bring in runners. The few observers clapped when Japan escaped jams, roared on the second run and focused their phones on the field before the last out.

For the US, the silver medal for second baseman and former speed skater Eddy Alvarez makes him the sixth person to win a medal at the Winter and Summer Olympics.

Earlier on Saturday, the Dominican Republic beat South Korea 10-6 for the bronze, the country’s first medal in a team sport.

Julio Rodriguez, the baseball-loving nation’s top hitter, said the medal meant the world and demonstrated that the small island can compete.

Missing out on the podium marked an upset for South Korea, who had two returnees from their gold medal finish in 2008. – Rappler.com