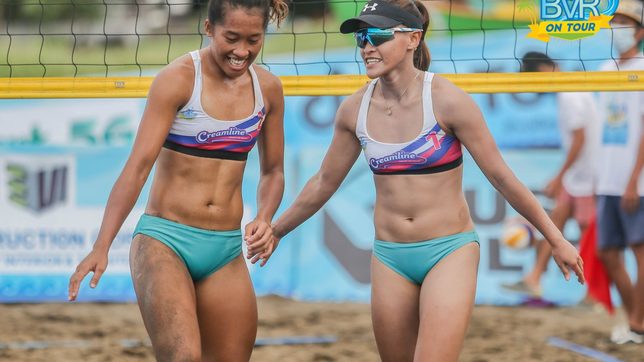 Rondina and Pons went perfect in 13 matches in the two-leg bubble and have actually won 19 consecutive games dating back in the 2019 Lianga leg where the prolific duo also emerged victorious.

Also pulling off a championship double are Krung Arbasto and Jude Garcia of Creamline 1 as they bested Tuguegarao’s James Pecaña and AJ Pareja, 21-17, 21-16, in the men’s finale.

It was Rondina’s fifth BVR crown, while Pons captured her third.

The twin Santa Ana legs also served as a buildup for the national team standouts led by Rondina and Pons for next month’s Asian Senior Beach Volleyball Championship in Phuket, Thailand.

(We’re so grateful for the opportunity to play here. We’re focused on our goal.)

The title, meanwhile, was the seventh for Arbasto in BVR, while Garcia captured his second straight, both in the bubble, as the duo also looks forward to performing well in international competitions.

(We’ll just focus on our goal. We didn’t just prepare here but also for the Asian Senior Beach Volleyball Championship in Thailand next month and the SEA Games next year.)

Not only did the pairs of Rondina and Pons, and Arbasto and Garcia emerge as the biggest winners in the BVR restart, but the beach volleyball community as well.

The championship capped a successful two-leg bubble – BVR on Tour’s first tournament in since September 2019 – as the five-year old beach volleyball circuit continued to give the athletes a pathway to pursue their dreams again in the sand court amid the pandemic.

There were many obstacles that came along the way, but for BVR founder Charo Soriano, it was well worth it as the league kept the entire delegation safe and healthy in the entire bubble.

In the semis, Rondina and Pons withstood PLDT’s Ella and Iza Viray’s A-game in the first set before hammering out a 21-17, 21-12 victory to advance to the title match.

Rodriguez and Gervacio scraped past Sta. Lucia 1’s Jackie Estoquia and DM Demontaño, 21-13, 17-21, 18-16, in the 52-minute semifinal to arrange a championship duel with Rondina and Pons.

Arbasto and Garcia, who were also undefeated in 14 matches in the bubble, first marched to the title match via injury forfeit after Negros Occidental Beach Volleyball Club’s Eljhay Ronquillo was not able to complete the game.

Pecaña and Pareja booked a finals date with Arbasto and Garcia after defeating EVI Construction’s Doy Barrica and KR Guzman, 21-17, 21-14, in the other half of the semifinals.