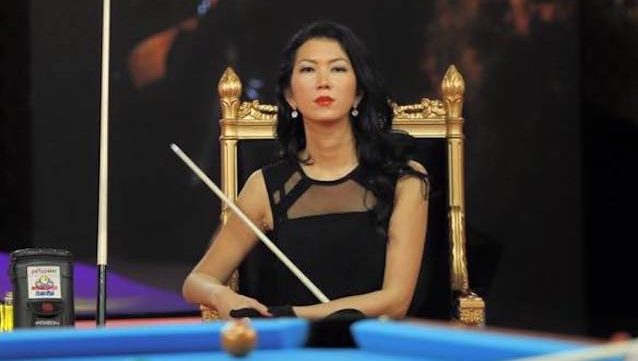 Billiards icon Jeanette Lee has been diagnosed with stage 4 ovarian cancer after an illustrious career that saw her win various pool championships.

“I intend to bring the same resolve I brought to the billiards table to this fight,” Lee said in an announcement posted on the American Poolplayers Association website.

The 49-year-old Lee previously ranked as the No. 1 female player in the world and won a gold medal in nine-ball play for the United States in the 2001 World Games.

Lee was inducted into the Billiard Congress of America Hall of Fame in 2013.

A well-traveled competitor, the player known as the “Black Widow” flew to the Philippines in 2001 and took on Filipino pool legend Efren “Bata” Reyes in a race-to-13 nine-ball challenge.

“You have to give respect to Efren. He is a great player. He is always going to give you a good match and he is going to make you pay for your mistakes,” Lee said after her match with Reyes.

Her friends set up a GoFundMe page named the Jeanette Lee Legacy Fund for the future of her 3 daughters as they said doctors have declared Lee – a single mother for years now – only has a “few months to a year left to live.”

The fund, which has a goal to raise $250,000, will be dedicated to the college education of her daughters.

More than $80,000 has been donated as of publication time.

“The future care, well-being, and education of her girls is the biggest cause of anxiety for her,” the GoFundMe page stated.

Lee has also battled scoliosis, which is believed to have “masked” the pain from her cancer. – Rappler.com