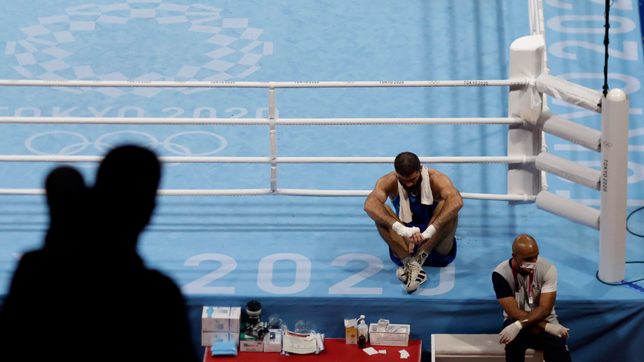 PROTEST. Mourad Aliev of France refuses to leave a ringside after the referee disqualified him during a fight with Cheavon Clarke of Britain.

French boxer Mourad Aliev lodged a furious protest with an hour-long ring-side sit-in on Sunday, August 1, after being disqualified in his super heavyweight quarterfinal bout, expressing his contempt by spitting out his mouth guard and punching at a TV camera.

His opponent, Britain’s Frazer Clarke, suffered cuts above on his face in what the referee deemed an intentional headbutt by Aliev, winning the match with four seconds left in the second round.

When the referee motioned for a stop, Aliev flew into a rage, kicking the mouth guard he had ejected from his mouth and making offensive gestures with his arms while pacing around the ring.

For the next half-hour, the Moscow-born pugilist remained planted at one corner outside the ring, then departed the arena after a word with a group of suited officials only to return about 15 minutes later to resume his sit-in.

“It’s totally unfair – I was winning the match,” the 26-year-old told a throng of reporters after finally abandoning his spot at the Kokugikan arena in Tokyo.

“I was just stopped without any warning and they just told me that ‘you lost’ – just like that. So I think it was an act of sabotage,” he said. The first round had gone to Aliev 3-2.

“I prepared my whole life for this event, so getting mad for something like that is natural,” he added.

Clarke, who secured at least a bronze with the win, said he sympathized with the Frenchman – three years his junior – and that he had walked over to him after the bout to try to calm him down.

Clarke said he had expected a tough match, having lost to him six weeks ago although he noted he had beat him twice in the past.

“He’s a good fighter… I didn’t want him to damage his reputation or to be rude to the judges and officials, because they’re only doing their job. I was trying to give him a bit of advice from an experienced and senior head.

“These things happen. I’ve had a lot of downs in my career, a lot of ups and a lot of downs. This is a down for him. I know him, he’s a good person, I believe he will be a champion,” Clarke said. – Rappler.com