‘I’m no sulker and I’ll get back to grind,’ says Joshua after Usyk loss 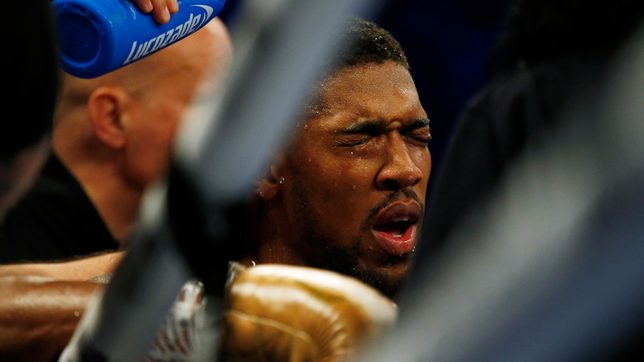 IMPROVE. Anthony Joshua says he could do a lot better in a potential rematch against Oleksandr Usyk.

Deposed heavyweight champion Anthony Joshua said he would not waste time sulking after his unanimous points defeat by classy Ukrainian Oleksandr Usyk in London on Saturday.

The 31-year-old Londoner was unable to counter the superior boxing skills of Usyk as he suffered his second professional defeat to lose his WBA, WBO, IBF and IBO belts.

His chastening defeat scuppered the prospect of a unification fight against WBC holder Tyson Fury, who fights American Deontay Wilder in Las Vegas next month.

Joshua, sporting bruises around both eyes, said his first thoughts after the loss were how he could improve, with a rematch against the undefeated Usyk his likely next option.

“When I was walking back through the tunnel, I just said to myself, ‘I’m ready to get back to the gym, I’m ready to just put that work in’,” Joshua, who had the vast majority of support from a 67,000 crowd at the Tottenham Hotspur Stadium, said.

“I just want to get back to the gym, get back on the grind, and improve, so when I fight these good guys and see that they are hurt, I can capitalize on the opportunity.

“I’m a different kind of animal. I’m not a sulker. This is a blessed opportunity, to be able to fight for the heavyweight title of the world, fight good fighters time and time again, and for people to come out.”

Joshua said he had trouble seeing after the ninth round, owing to the swelling under his right eye caused by the accuracy of Usyk’s punches.

Although by that stage, he was already struggling to keep pace with the elusive Ukrainian, who produced a sensational performance in only his third professional heavyweight bout, having previously been the undisputed cruiserweight king.

A rematch would give Joshua the opportunity to set the record straight, although on the evidence of Saturday night, he would need a vastly different strategy as trying to “out-box” Usyk was clearly doomed to failure.

“I’m going back to look at ways that I can improve. Straight away, I’ve already been watching the fight and thinking ‘I could’ve done that better’,” Joshua said.

“I’m not going to be going home and be crying about it, because this is war. It’s a long process. This isn’t just one fight and then I’m done.”

This defeat was more worrying for Joshua than his shock loss to Andy Ruiz Jr in 2019 – which he avenged in a rematch – because he was largely outclassed for 12 rounds.

His promoter Eddie Hearn said Joshua would have to find a way to improve to beat Usyk.

“He is going to go away and all he will do is think about Oleksandr Usyk. He will be thinking: ‘How can I beat him, how can I improve?’ He is obsessed with improving.”

Hearn said it was doubtful a rematch would happen in Ukraine, saying it would more likely be in Britain or a third country. Wherever it is, Usyk remains a formidable barrier to Joshua’s hopes of taking on Fury anytime soon.

“As I said, I’ll fight Tyson Fury, (Deontay) Wilder, without the belts,” a defiant Joshua said.

“The belts are fun. It’s great, it’s legacy. But with or without the belts, I’ll fight whoever.” – Rappler.com