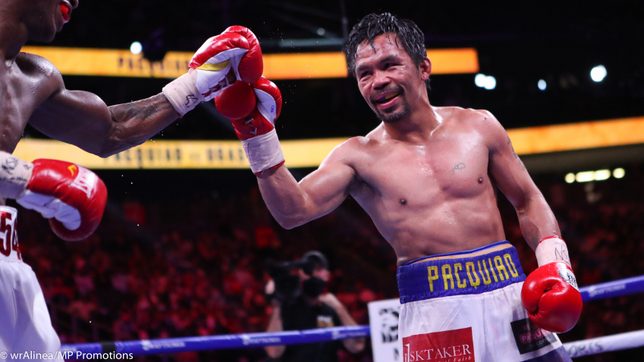 BOXING POLITICIAN. Manny Pacquiao may be bidding his boxing career goodbye as he aims for a higher national post.

Facebook Twitter Copy URL
Copied
'All of us at Top Rank support Manny,' says Bob Arum after Manny Pacquiao announced he is seeking the presidency in 2022

They may have parted ways, but Bob Arum and Manny Pacquiao still treat each other cordially.

Arum, the founder and chief executive officer of Top Rank Promotions, expressed his support for Pacquiao as the Filipino boxing icon announced on Sunday, September 19, he would run for president in 2022.

“All of us at Top Rank support Manny,” said Arum, a lawyer who once worked for the US Attorney’s Office for the Southern District of New York.

“He is a man of integrity. He will be a great president for all the people of the Philippines.”

Top Rank handled Pacquiao’s ring career for over 13 years until 2017.

Pacquiao, who is now with Premier Boxing Champions, lost his last fight against Cuban Yordenis Ugas via unanimous decision in August.

His boxing career may be over, however, as he is going to be very busy organizing his forces and looking for resources if he is really bent on seeking the presidency next year, a different sort of fight from what he may be used to. – Rappler.com