Facebook Twitter Copy URL
Copied
After a convincing triumph over bitter rival Gennadiy Golovkin, Canelo Alvarez says he needs to ‘get strength’ in his left hand before a revenge match against Dmitry Bivol

Saul “Canelo” Alvarez said he will need surgery on his left hand before seeking a possible rematch with Dmitry Bivol after handing bitter rival Gennadiy Golovkin a second defeat to complete their trilogy of fights in Las Vegas on Saturday, September 17 .

Bivol inflicted the second of only two losses on Alvarez’s 62-fight resume when the pair clashed in May. The Russian will take on Gilberto Ramirez in a light heavyweight title fight in Abu Dhabi on November 5.

While Alvarez is keen to step up a weight class to take on Bivol again, the undisputed super middleweight champion wants to ensure he has recovered fully from his encounter with Golovkin before finalizing a second fight with the 31-year-old.

“I’ve gone through some difficult things in my life and the only thing you can do is try to continue and move forward,” said Alvarez.

“I’ve gone through difficult times recently with my defeat and I’ve actually shown defeats are great because it enables you to come back and show humility.

“I need surgery on my hand after this because I’m not good from my left hand. But I’m good, I’m a warrior, that’s why I’m here.

He said the injury had affected him “a lot. I can’t hold a glass. But I’m a warrior.” 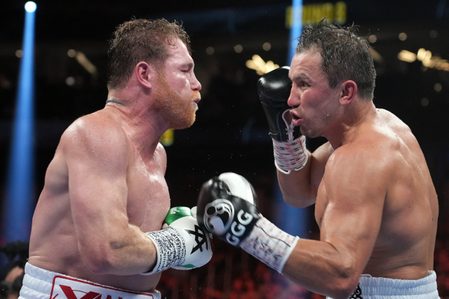 Bivol became the only fighter other than the great Floyd Mayweather Jr. to defeat Alvarez when he won a unanimous decision over the Mexican when they clashed for the WBA light heavyweight title.

Alvarez bounced back from that loss on Saturday to comfortably defeat his great rival Golovkin for the second time in their three fights and he now has his sights set on revenge against Bivol.

“I need to come back and get strength in my hand, recover my hand and my body so I can come back stronger than ever,” he said.