Casimero gets pay cut in title battle vs Butler

WORKOUT. Johnriel Casimero has yet to decide where to hold his training camp.

Johnriel Casimero will have to settle for a smaller paycheck when he dangles his World Boxing Organization bantamweight crown against British Paul Butler on December 11.

This developed as only Probellum Promotions submitted a bid for the fight to be held at either Dubai, United Arab Emirates or Liverpool, England.

It’s far lower than what Casimero (31-4 with 21 knockouts), who was co-promoted by MP (Manny Pacquiao) Promotions in his last few fights, received in his last defense against Guillermo Rigondeaux, who he beat by split decision on August 14 in Carson, California. 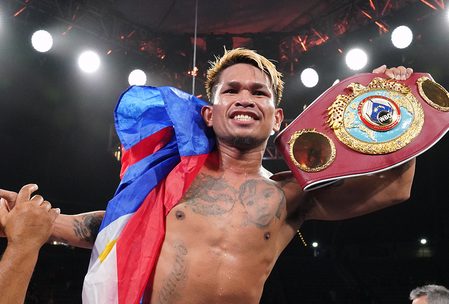 Butler, the former International Boxing Federation bantamweight champion in 2014, holds a 33-2 card with 15 KOs and will be the sentimental favorite if the fight goes to the United Kingdom.

Casimero, however, is familiar with fighting in hostile territory having seen action in South Africa, Nicaragua, Argentina, Mexico, Thailand, Panama, China, and the United States.

It’s also a downgrade for Casimero as far as quality of opposition is concerned as the power banger from Ormoc City is pining for unification with either Japanese “Monster” Naoya Inoue, the World Boxing Association and IBF champion, or Nonito “Filipino Flash” Donaire, the World Boxing Council titlist.

Both Casimero and Butler are on a seven-win run with Casimero flaunting six knockouts in that stretch. In contrast, Butler has only stopped one of his last seven victims.

Casimero is still on vacation in the Philippines and will have to decide soon on when and where to hold his training camp.