VETERAN. Nonito Donaire looks to bank on his experience.

MANILA, Philippines – Nonito Donaire Jr. and Reymart Gaballo showed mutual respect in the buildup to their title tussle. Once the bell rings on Saturday, December 11 (Sunday, December 12, Philippine time), however, they will transform into fierce warriors and try to knock each other out at the Dignity Health Sports Park in Carson, California.

Although he’s past his prime at 39 years old, Donaire has been tagged the favorite to retain the World Boxing Council bantamweight belt against the unbeaten Gaballo, who’s still peaking at 25.

According to Donaire (49-8, 27 knockouts), who even acted as Gaballo’s interpreter during the final press conference on Thursday, he’ll be going for a knockout as always.

Although he idolizes Donaire, Gaballo (24-0 with 29 knockouts) is determined to snatch the 118-pound crown.

And his handler, JC Manangquil of Sanman Promotions, believes the time has come for Gaballo to sit on the throne. 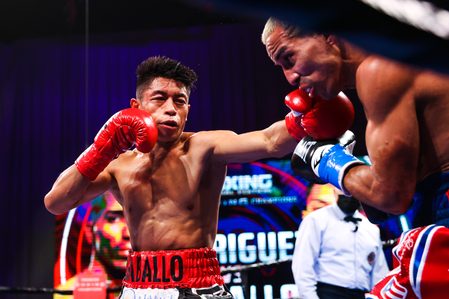 Whipping himself into prime form with the guidance of his wife Rachel, Donaire checked in at 117.2 pounds in the official weigh-in on Friday.

After a long training camp in Miami, Florida, under Cuban coach Osmiri Fernandez, Gaballo came in even lighter at 117 pounds.

The Donaire-Gaballo clash is one of the few all-Filipino title clashes. The first happened between Pancho Villa and Clever Sencio way back in 1925. Also in the historical ledger are the Jerwin Ancajas-Jonas Sultan encounter in 2018, the Donnie Nietes-Aston Palicte battle also in 2018, the Pedro Taduran-Rene Mark Cuarto showdown in 2021, and the Vic Saludar-Robert Paradero clash also early this year.

In the undercard, Marlon Tapales will be pitted against the resurgent Hiroaki Teshigawara in a super featherweight eliminator.

This will be Teshigawara’s first fight out of Japan and Korakuen Hall in particular. – Rappler.com